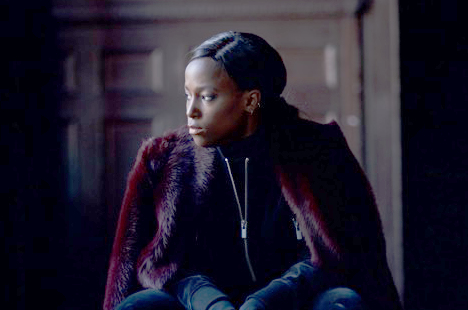 She's also been called “the Lauryn Hill of Sweden”. And it’s not an overambitious comparison. Ddumba not only sings of love and heartbreak with a distinct urban twist but her voice has that unusual blend of silk and grit, sorrow and anger so redolent of the former Fugees singer.

Ddumba modestly refutes the comparison, however. “I don’t see it at all. I would never compare myself to Lauryn Hill.”

Ddumba’s modesty is understandable. She has just a clutch of singles behind her, although last year’s Not Too Young has a remarkable 26m listens on Spotify.

However, she was named Sweden's 'Newcomer of the Year' at the 2016 P3 Gold Awards in February, drawing further prompting comparisons to Mary J Blige. And her debut album, due out in September, could mark a milestone in the Swedish soul music explosion that has been such a notable feature of Swedish music’s last five years of world domination – Ddumba’s album could well be the first great Swedish soul album of the current wave.

Ddumba’s elder soul sisters, Mapei and Seinabo Sey, have both made good debut albums but neither has quite grasped greatness.

“The stage that soul music has gotten to in Sweden is amazing. I feel like there are so many big Swedish artists such as Seinabo Sey and Mapei coming up now and I think that’s lovely because a lot of them are my friends that I have known for years. It’s fantastic that everyone gets to be a part of the Swedish music scene and an incredibly successful scene too. It's just amazing that we get the chance to do this.”

Swedish pop music is in the midst of a boom that continues to defy gravity. Revenues in the Swedish music industry increased by 25 percent between 2009 and 2014, buoyed to a large extent by export revenue, which rose by 29 percent in 2014 alone. And Swedish pop sensation Zara Larsson teamed up with French DJ David Guetta on This One's for You, the official anthem of the recently completed Euro 2016 football tournament.

Singing in a choir

And the range of Swedish artists turning heads abroad continues to expand as well, from First Aid Kid and Zara Larsson to the emerging cadre of soul singers that includes Ddumba.

I offer a theory to Ddumba as to why this is happening, why the Swedes are just so good at pop music. Around 30 percent of Swedish children attend publicly subsidized, after-school music programmes. Max Martin, the hitmaker behind “…Baby One More Time,” “Teenage Dream,” and “Shake It Up”, and a man behind only Lennon and McCartney in the number of hits created, is one of these programmes’ most famous alumni, and the superstar producer has publicly credited his early music education with his professional success in interviews.

Children are not sneered at for wanting to be musicians; instead their ambitions are supported and bolstered. A large part of the education in the pre-school years is taken up with music and singing.

By the time they start school at age seven, kids have learned a great deal about singing and rhythm. Furthermore, many Swedes join choir groups in their teens, regardless of gender or religious affiliation. Sweden boasts the highest number of choirs per capita in the world – a startling 600,000 Swedes sing in choirs.

Indeed, Ddumba is an alumna of one of Sweden’s most famous choirs, the Tensta Gospel Choir of Stockholm.

“I sang a lot when I was a kid. But nobody put a focus on that actually. It was just, ‘There goes Sabina singing again.’ So when I started to sing in the Tensta choir when I was 14 and people started telling me you have a great voice and I was like, ‘What?’

“That wasn't anything I was used to hearing because nobody ever told me. I think I knew it was good but nobody ever said anything. But ever since, people have been supporting me in different ways. Just telling me to continue doing what I'm doing or just telling me they believe in me. It does feel very supportive here in Sweden.”

'Music in my veins'

Ddumba was born in Stockholm 22 years ago, the sixth of eight children born of Ugandan parents.

“I was born with music in my veins, so my interest in music has always been there. I’ve also always had a thing for rhythms. I was taught a lot of Ugandan nursery rhymes and songs when I was little, and I think that awoke my interest in melodies and phrasing. That’s something I’ve realised now, though, back then they were just children’s songs. I had no idea that my interest in music would develop into something much bigger.”

Ddumba participated in Sweden’s short-lived franchise of The X Factor in 2012 but had her first taste of fame in 2013 when she sang backing vocals for Katy Perry’s Walking On Air. The writers were Max Martin and Klas Åhlund, who, having heard of Ddumba’s remarkable voice, asked her to lay down some vocals as a test. The test ended up on the recording.

“I did not even know that it was a song for her when I improvised the melody in the studio. I was doing it for Klas Åhlund, which in itself felt great.

Ddumba’s father, however, wasn’t always that supportive of his daughter’s musical ambitions.

“He was forever telling me to be a lawyer or be a doctor. ‘That is the safest choice for you to do and for you to have a great future and a great career.’ I heard that a lot. I heard that singing isn't a real job.”

Has he changed his tune since then?

“Yeah, he has. It would be strange if he hadn’t. Like, seriously. After all, this work I have done. You're still going to tell me I have to be a doctor? No.”