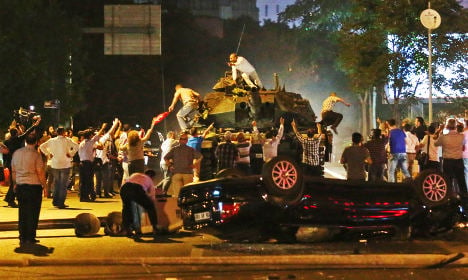 Some holidaymakers in Marmaris, on Turkey’s southern coast, have described hearing gunfire in the streets. Photo: TT

The advice for thousands of Swedes already in Turkey, was “to stay indoors, check with relatives and follow the news,” said Schwirtz.

The Foreign Ministry does not have any confirmed information on how many Swedes are currently in Turkey.

Swedish holiday company, Fritidsresor, says it has 1,700 Swedes in Turkey and said that reports suggest that there was no trouble in the resorts along Turkey's southern coast.

However, despite Fritidsresor’s protestations, some holidaymakers in Marmaris, on Turkey’s southern coast, have described hearing gunfire in the streets and the road between Marmaris and Icmeler remains closed.

Once the Foreign Ministry made its decision to advise against travel, Fritidsresor cancelled all charter flights from Sweden to Turkey on Saturday and Sunday.

Swedish Prime Minister Stefan Löfven said in a statement on Saturday that he was following the situation in Turkey with concern.

“It is still an unclear outcome. The government is watching the developments carefully. The foreign ministry has activated its consular crisis organization and advises Swedes who are in Turkey to stay indoors, get in touch with their relatives and stay informed about what's happening.”

Swedish Foreign Minister Margot Wallström condemned the coup attempt, and worried about the ramifications it could have.

“Military coups to solve political problems are nothing the EU group advocates,” Wallström told Swedish news agency TT on Saturday morning, adding, “The coup can strengthen President Erdogan's hand, and lead to him changing the constitution and further limiting freedom of expression.”

“We are going to have a meeting in the EU in Brussels today (Saturday) and tomorrow evening. On Monday, the EU foreign ministers and the USA's Secretary of State, John Kerry, who is on a visit, are gathering to discuss how we should act,” said Wallström.

“Sweden has a large Kurdish diaspora and we must continue to have a big respect for the opposition in Turkey. Sweden shares the EU's line that gave support to President Erdogan and hopes for a quick return to constitutional rule, regardless of our criticism of restrictions to freedom of expression in Turkey. Turkey is such an incredibly important player both in the crisis in Syria, the refugee question and when it comes to Cyprus, and we should maintain good diplomatic relations with Turkey,” Wallström continued.