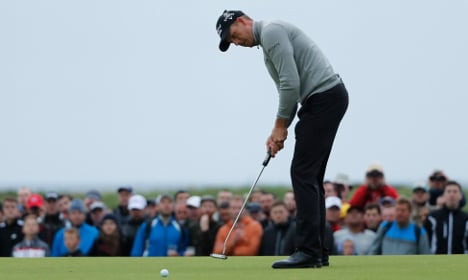 The 40-year-old Swede has never won a major despite several near misses. Photo: TT

The 40-year-old Swede has never won a major despite several near misses in his career but he put himself in pole position with a superb 68 in blustery conditions on Saturday.

That left him at 12 under par for the championship and allowed him to leapfrog Phil Mickelson, whose round of 70 left him at 11-under, at the top of the leaderboard ahead of the finale.

“I'm looking forward to the opportunity. I've worked hard these first three days to put myself in this situation and, once again, I'm going to try my hardest tomorrow (Sunday) to finish the job,” Stenson said.

Mickelson had held the advantage after each of the opening two rounds and claimed that already having won the Claret Jug in the past meant he felt less pressure.

Stenson, meanwhile, accepted that he couldn't afford to let his mind wander to tantalising thoughts of victory yet.

“Yeah, thoughts of the outcome is never really helping you. I know what I would like to see tomorrow. There's no question about it,” said the Swede, who was the runner-up at Muirfield in 2013 and finished tied third at The Open in 2008 and again in 2010.

“But in a way I've got a second and two thirds at The Open, so it's not like I'm looking to pick up any more of those finishes. There's only one thing that matters tomorrow.

“I know he's not going to back down, and I'm certainly going to try to not back down either. So it should be an exciting afternoon. He's one of the best to play the game in the last 15, 20 years for sure, and it's going to be a tough match.”

Three years ago Stenson was beaten to the title by Mickelson, who ended his own long wait to win the Claret Jug with a final-round 66.

Stenson had come into the Sunday then trailing leader Lee Westwood by four shots but leading Mickelson by one.

“Yeah, I was one of the guys who was up there at Muirfield and Phil won it very deservingly and made a great finish, four birdies on the last six holes, I believe.

“It would be great to hand one back to him tomorrow, absolutely. As we know it's going to take some good golfing to do that, but I'm certainly willing to give it a try.”

He has the chance to make up for Muirfield and finally be a winner after seven top-four finishes in majors.

Stenson, who triumphed at the BMW International in Germany late last month, would also become the first Scandinavian winner of a major, and in the home of golf to boot.

“Yeah, it would be massive. This is the one thing I'm looking for. It would be the icing on the cake. But at the same time I've worked hard, I've put myself in a great spot.”

With a nod to the typically Scottish summer weather seen at Troon over the last two days, he added of the fear of failure: “The sun will come up on Monday anyway, hopefully. Maybe not in Scotland, but in other parts of the world.”

His partner Mickelson was long associated with near misses at majors before winning the Masters in 2004, and he has now won five of them.

Stenson might take inspiration from that as the duo go out together once again in the final pairing on Sunday afternoon.

“We've played a lot of golf together this year, and I've known him for many years,” Stenson said.

“I enjoy his company. He's always fun to watch. He hits some spectacular shots and, yeah, he's a great competitor. So it's inspiring.