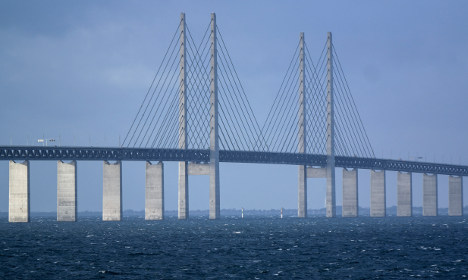 The Öresund Bridge between Sweden and Denmark. Photo: Erland Vinberg/TT

The bridge, which connects the Danish capital with Sweden's third largest city Malmö, is off limits to both cyclists and pedestrians.

The four cyclists were seen via surveillance cameras heading toward Sweden shortly after 5am on Monday.

“Two people were stopped by police en route while the others came out on the other end of the tunnel at [the island of] Peberholmen. They began moving across the traffic lanes and railway. We first closed Sweden-bound traffic and then shut down the whole bridge,” Jens Genders, a spokesman for the bridge operator, told Danish news agency Ritzau.

Copenhagen Police arrested all four cyclists, but did not immediately release any information about their identity or motives for cycling across the bridge.

“We are investigating who these people are. We are finding out where they came from, who they are and what their intentions were,” police spokesman Henrik Svejstrup told Ritzau.

The bridge was reopened at 6.41am, police said.

At around noon rail traffic was stopped again after a bridge traffic controller spotted people in the tunnel area near Copenhagen Airport. Buses replaced trains between Malmö and Denmark.

Although the cyclists' motives were not immediately known, recent months have seen migrants attempt to cross the bridge by foot in an apparent attempt to avoid Sweden's border controls.

In May, Swedish police told The Local, after five asylum seekers for the first time successfully crossed the bridge on foot, that the number of illicit border crossings may well be higher than previously known.

Eight people have on four separate occasions have also attempted to skirt ID controls on the Swedish-Danish border by hiding on or underneath trucks travelling by Öresund ferries from the Danish city of Helsingør to Helsingborg in Sweden, according to a report sent from the Danish justice ministry.