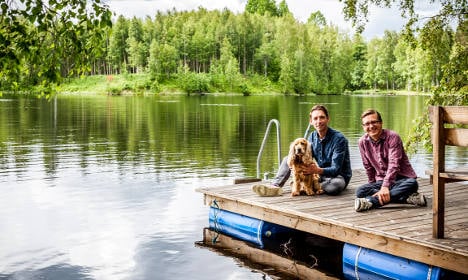 Sweden has been top of European surveys on urban growth in the past decade, with more and more workers leaving the countryside to try their luck in the nation's big cities. Good for business, say the proponents of urbanization. Bad for rural areas, say critics.

This is the story of how two Belgians came to help Sweden keep its countryside alive – by selling the concept of silence to stressed-out international tourists in need of a place to breathe.

“I always had a dream of moving to a Nordic country. Sweden is the perfect combination of Finland and Norway in terms of the landscape and the people. We bought a holiday house in Sweden and it became harder and harder to go back to Belgium,” says Jeroen Sleurs, who today runs ecotourism retreat Stilleben with his partner Sam Lormans in Åmot, north-west of Gävle.

Located some 200 kilometres north of busy capital Stockholm, Åmot is a small place of not much more than a few hundred people. But to Sleurs and Lormans, the sleepy village in the Norrland region was nothing short of perfect.

“We once went to the most remote place in Belgium, which is the Ardennes. From the top of the hills, we could still hear the noise of the traffic from the motorway,” laughs Sleurs.

Åmot could easily have become another ghost town victim of urbanization, were it not for the hard work of dedicated local residents and newcomers such as him and Lormans.

“Many are not aware of the resources they have. But that's not just in Sweden. Everyone longs for what they don't have, so they move to the big cities. And there are no jobs in Åmot, so even if people wanted to go back they can't,” says the 40-year-old Belgian.

As for Sleurs and Lormans, they decided to simply take matters into their own hands.

“When we finally moved to Sweden, we thought: well, if we're going to live here, what do we do? Create our own jobs. It is very hard to find work in Sweden. I think I applied about 200 times for jobs that I never got,” says the ex-sales manager for Scandinavian Airlines.

What many do not realize is that despite being a nation just shy of ten million citizens, Sweden is, geographically speaking, a very large country, with vast and empty spaces of forests and fields.

“We got the idea, why don't we start a silence retreat? We had bought an old parish hall, so the atmosphere was very contemplative. We invited a few people and and had a Buddhist join us,” says Sleurs.

The concept took off, and in 2012 the couple officially opened a bed and breakfast, this time widening their target market to anyone in search of a quiet break in Sweden.

Lormans, a former costume designer, used his creativity to set up the website and decorate the new place. Sleurs relied on his sales experience in the airline business and took a course in permaculture to develop the ecotourism branch of their venture. They also bought a small cottage on a nearby island, rented by visitors who want their own space.

“One old man with bad hearing told me that when he got his hearing aid he had a headache for two months because there was suddenly so much noise. He said that this was the first time he was able to consciously hear the silence. That's touching,” says Sleurs.

“But it wouldn't have worked if I didn't have my network and understanding that we should look for foreigners. If you live in a small village, there's not a lot of people, so you need to target foreigners. And a Swede would never pay 10,000 kronor to spend time on an island!”

International tourists, on the contrary, often struggle to find the same kind of solitude at home.

“The first question our customers ask is 'where are the people?' Because it's summer and there are no Swedes outside as far as they can see. But that's because there's also a lot of space. About 99 percent of them say it's exactly what they're looking for,” says Sleurs.

“And all of them bring their own alcohol, because we warn them in advance,” he laughs about state-monopoly chain Systembolaget's restrictive opening hours and rural Sweden's long distances.

The venture seems to have paid off. Last year they counted that around 2500 nights visitors stayed at the bed and breakfast or the cottage, this year they are on course for 3000. It means that a lot of money is being fed back into the local community by tourists spending their kronor in Åmot. All thanks to two Belgians.

“Swedes should be aware that foreigners could contribute to their countryside. Sweden does a lot of things for refugees, and that's fantastic, but they should also recognize what could be gained from Europeans,” says Sleurs.

He is mostly positive about setting up a new business in Sweden (as long as you don't ask him about customer service and banks), but adds that it may have been easier for him, who just had to – as he describes it – move his feet in the travel industry, from airlines to hotels.

But he admits that despite being attracted by the silence at first, he also misses the buzz.

“I am an urban citizen and I do miss the urban life and my friends. We have high-speed internet, so that's fantastic, but I am a very social person,” he says. “But I travel a lot to visit friends and customers.”

And while he and Lormans are more than happy for now to grow their life and business in Sweden (they are opening a hotel as well in Åmot next summer and are looking at further options for organizing yoga and mindfulness retreats), nothing lasts forever.

“I don't think I will die here. If I can plan that, which you usually can't,” says Sleurs. “But a few years before my pension I think I will move back to Belgium, if only because I'll need a beer from time to time without driving for an hour and then having to sleep at someone's house.”