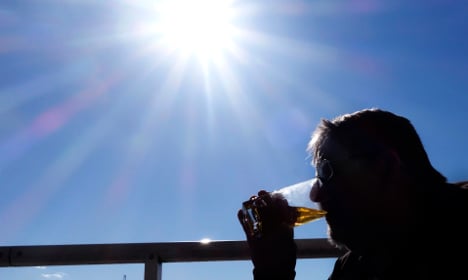 A man enjoys a beer and a rare glimpse of Swedish sun. Photo: Hasse Holmberg/TT

Swedes were hammered by heavy rain at the start of last week, with thunderstorms leading the national weather institute SMHI to warn of possible flooding in basements and streams.

And while this Monday also has the potential to start in a wet fashion in some parts of the country due to the presence of rain clouds, warm air blowing in from the southwest means that by the midweek, the Swedish sunshine should be back with a bang.

“High pressure is growing from the west, and the weather will stabilize from Tuesday. It looks like it will be partly cloudy, followed by gradually drier weather,” SMHI meteorologist Lovisa Andersson told news agency TT.

Anyone considering a last-minute break to take advantage of the sunshine should look to Wednesday, when temperatures in the Nordic nation are expected to peak at 25C, thanks to warm air from western Europe.

Admittedly, it isn't quite the 42C Spain is set to roast in this week, but 25C is a mini-heatwave by Swedish standards this summer, and the break from drizzle has provoked relief among residents.

“From this week onward it'll be summer again!” wrote one excited Twitter user from Uppsala. “It's summer today. The birds are singing and the sun is shining. Good morning people!” wrote another enthusiastic tweeter.

It’s worth grabbing the opportunity to sunbathe in Sweden while you still can however. Though the warmth should continue until the end of the week, there is also the potential for rain and low pressure areas to emerge as the weekend approaches.

That may not be the most helpful prophecy, but the uncertainty is in line with the SMHI’s overall prognosis for July: predict the unpredictable.

In a month that has featured both hailstorms and 25C heat, meteorologists are even attempting to teach Swedes how to measure the weather by analyzing the clouds.

So if you see any of those pesky cumulus clouds in the morning – the ones that look like balls of cotton – it may be worth packing an umbrella, just in case.

Perhaps the best advice is to take advantage of that midweek sun while it’s on offer. Though just how much sun you should take in is up for debate, as Swedish doctors Pelle Lindqvist and Håkan Olsson argued here.