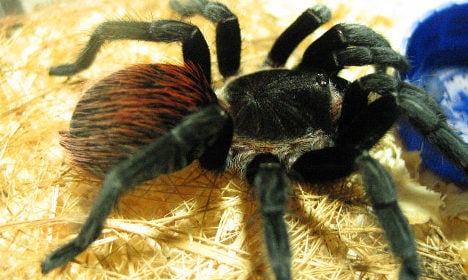 One theory was that the spider could be a Mexican red rump (pictured). Photo: davidricardoabrenica/Flickr creative commons

What is the one thing, aside from ripe avocados, you would least expect to find in a Swedish grocery store?

We bet a South American tarantula comes near the top of that list. So it sparked quite a stir in the Nordic country when that exact thing happened at an Ica Maxi store in Jönköping, southern Sweden, on Monday.

“In my 12 years I have never heard of anything like it. It was probably a once in a lifetime event. But everything went well, it sat still and we were able to catch it,” store manager Oskar Henningsson told regional newspaper Jnytt.

The hairy beast was taken to Tropicarium at the Kolmården Zoo, where experts said it was a South American tarantula.

“The tarantula has no visible injuries, which indicates that the staff did the right thing,” animal carer Adrian Odenlind told Jönköpings-Posten.

It was initially believed that the spider had entered the store via a box of apples. However, Henningsson later said that witnesses had seen a person, thought to be its now former owner, leave it in the store.

“To you who were seen leaving this spider on the pile of apples, we want to say that your pet has been given a new home at Kolmården. I hope you all have a sunny summer and urge you to take care of all pets, great and small,” he wrote in a Facebook post.

VIDEO: Watch the moment the spider was captured below

Tarantulas are poisonous, but have never killed a human, according to experts at the Skansen Zoo in Stockholm. Their bite can cause serious convulsions, nausea and pain.

It is not the first time exotic animals are found in Swedish supermarkets. Staff in Bograngen, Värmland, told The Local earlier this year that they had a fright when they discovered a boa constrictor inside a box of bananas.