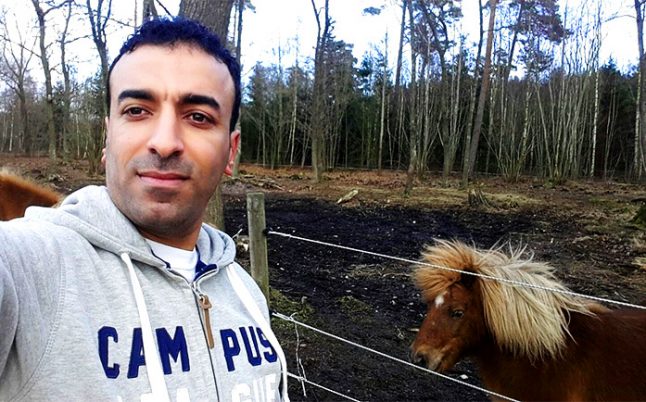 “At 7am on Tuesday I went to the bus stop to go to my interview with social services. There was an Afghan refugee in front of me in the queue, and he got on the bus, but suddenly the door was shut. I had to move my hand quickly before it was crushed. I didn’t really understand why the driver did that, and I just wanted to get to my interview on time.

“That bus driver often treated most of us – the asylum seekers living at the centre – badly. He always seemed annoyed, angry and contemptuous towards us. But I don’t remember ever seeing any of the refugees bothering him.

“Sometimes he would shout at us, start driving before everyone in the queue had boarded the bus, and sometimes he drove crazily fast, swinging the bus right and left to scare us! Everyone noticed what he was doing, but didn’t know what to do.

“We are refugees here and try to show the utmost respect for Swedish society. We felt totally baffled about how to deal with this driver.

“I saw one of our neighbours who had a car and told him what happened, and he drove me quickly to the next stop, so I could get on the same bus there and continue to the centre.

“I decided to take a picture of the driver, because I wanted to report him for how he had been treating us. He noticed me taking the picture, followed me to my seat and starting shouting at me; when I didn’t reply, he went back and drove for 20 minutes. Then, he left the steering wheel and approached me again, shouting loudly – I didn’t understand him but knew that he wanted my phone.

“He tried to get the phone out of my pocket forcibly; I stopped him and he started to beat me as is shown in the video. He beat my face, neck and back – they are all bruised now. Then he walked away and carried on driving. I didn’t defend myself because I couldn’t – and I didn’t want anyone to say 'look how hostile the asylum seekers are' or to be portrayed as the guilty party.

“One of the commuters (another asylum seeker) documented the incident, and a friend advised me to report it to police. When I went to the police station I saw the driver; he smiled and tried to approach me. I didn’t interact – I just couldn’t.

“I don’t know why or even how this happened, I never expected that this could happen to me in Sweden. It felt humiliating and I still can't understand it. I left Syria to avoid being beaten or killed, and I found myself being beaten in Sweden – that’s shocking.

“I am in shock and feel really bad. I left Syria after two of my brothers were killed – one of my brothers was shot on our doorstep, which then caused the death of my dad. My life has already been shaken by trauma.

“Today I went to the doctor who gave me a check-up and suggested that I visit a psychologist. I just don’t know what to say. I came here to have a peaceful life, just like any other human being.”

Editor's Note: The the bus driver mentioned above first spoke with the media the day after this story was published. His version of events can be found by clicking here or on the link above.