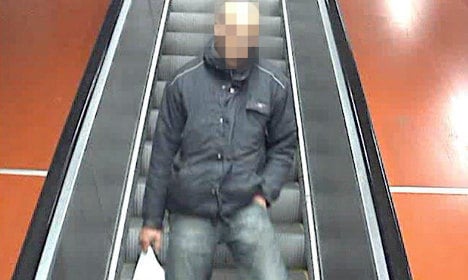 A CCTV image of the suspect issued by police. Photo: Polisen/TT

Police launched a probe into suspected attempted murder after a 23-year-old man was pushed onto the tracks at the T-centralen metro station on May 31st.

They seized another man the following day after residents in the Rinkeby suburb recognized him from CCTV images released by police.

The victim's girlfriend, who witnessed the incident, said the alleged attack had been unprovoked.

“The whole thing is preceded by the suspect standing on the same platform as the victim for a few minutes, but nothing has emerged suggesting that they had spoken to each other or had had any kind of interaction at all,” prosecutor Carl Mellberg told the Aftonbladet tabloid.

He charged the 34-year-old with attempted murder on Wednesday as well as violence against an officer, whom he is accused of having punched at the time of his arrest. He is also charged with resisting arrest on a separate occasion in November last year.

The man is undergoing a psychiatric evaluation after a preliminary report indicated that he may be suffering from a serious mental disorder. He has refused to comment on any of the allegations in interviews with police officers, the prosecutor and psychiatrists.

“The suspect has not wanted to take part at all,” said Mellberg.

Relatives of the 23-year-old victim, who suffered a punctured lung and several fractures, said on Monday that he had woken up from an induced coma. In a Facebook message he thanked his friends for their support, saying that he was now facing a long period of rehabilitation.

No date has been set for the trial.