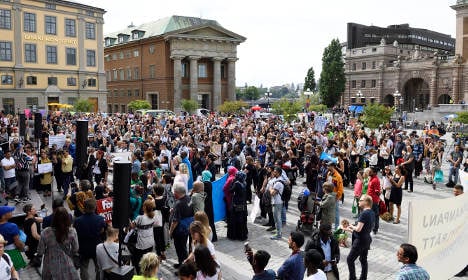 Protesters outside the Riksdag on the day the laws were approved. Photo: Henrik Montgomery/TT

The amendments to the country’s asylum laws mean that asylum seekers in Sweden are now granted the minimum level of rights the European Union requires of its member states.

One of the biggest changes is the introduction of a new temporary residence permit for those offered protection in Sweden, instead of permanent permits, as the ruled had been previously.

The right to family reunification has also been limited and security requirements tightened. The changes to the family reunification process could impact expats and Swedish citizens who would like their partner to come and live in Sweden with them, as The Local detailed here.

The changes are designed to significantly reduce the number of people seeking asylum in Sweden, which received a record 163,000 asylum applications in 2015.

The alterations have been criticized by charities in particular, including Amnesty, Unicef and Save the Children. But the Swedish government has argued that they are necessary in order to cope with the influx of people coming to the country.

“Even if we had the world’s best intake system, we don’t have a magic wand that allows us to conjure up hundreds of thousands of homes, tens of thousands of teachers and social workers, and hundreds of schools,” migration minister Morgan Johansson told news agency TT after the changes were approved.

“There are physical limitations on how many people we can take in,” he added.

The Swedish parliament approved the restrictions on June 21st by 240 votes in favour to 45 against. The Social Democrats, Green Party, Moderates and Sweden Democrats voted for the amendments, while the Centre Party and Left Party voted against. The Christian Democrats and Liberals abstained.

The changes are temporary, and will be in place for a maximum of three years.