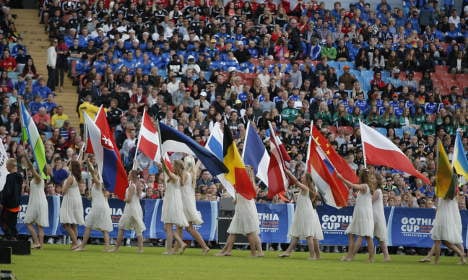 The 36-year-old man is in police custody suspected of sexually harassing and inappropriately touching three girls, aged around 16, on the first day of Gothia Cup on Monday.

One of the girls' mothers told the SVT broadcaster that the trio were leaving the opening ceremony when they were stopped by a group of teenagers and an adult man who tried to take their picture and then refused to let them go.

“They started touching them, tried to get their hands underneath their clothes. They touched their intimate parts. They kissed them and my daughter got the adult man's tongue in her mouth. They panicked and fought to free themselves,” said the mother.

Prosecutor Stefan Lind told regional newspaper GT that the man, a foreign national who deny the allegations, managed one of the international teams taking part in the tournament, the world's biggest football cup for youths aged 11-19.

“Due to the confidential nature of the investigation, I cannot discuss details regarding the molestation, but we're talking about things that happened over their clothing,” said Lind.

A police spokesperson confirmed to The Local on Thursday that the team in question is from a North African country.

The prosecutor has requested to have the manager remanded in custody pending the investigation, according to court documents seen by The Local. A preliminary hearing is expected to be held at Gothenburg District Court on Friday.

Gothia Cup bosses decided on Wednesday to expel the entire team from the competition, the first such move in the tournament's four-decade history.

“All kinds of abuse is unacceptable and if they take place in connection with Gothia Cup it is of course shocking for us. Everyone in our organization feels extremely upset about this,” general secretary Dennis Andersson said in a statement published in English on Facebook.

“Can't we all, men and guys, once and for all realize that we need to respect women and girls, that they should not have to risk being subjected to abuse in any context,” he added.

Gothia Cup, also known as The World Youth Cup, is organized by Gothenburg top flight club BK Häcken. Since its humble beginnings in 1975 with 275 participating teams, it now sees around 1600 teams from 80 different countries descend on the western Swedish city every year.

It is not the first time, however, that assaults or other disturbances have been reported during the tournament. In 2014 the competition decided to scrap an opening disco evening after reports of sexual assaults. Alleged rapes or attempted rapes have also been reported in previous years.

For Sweden, the latest incident follows a spate of reported sexual assaults and rapes at festivals across the country this summer.