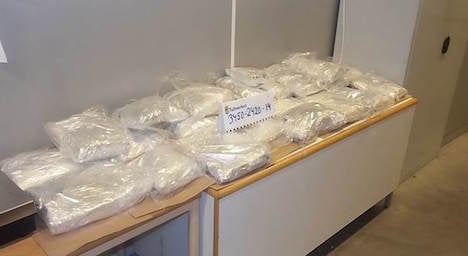 A photo of 50 kilos of amphetamine seized in Malmö earlier this year. Photo: Police/TT
The gang is believed to have pumped tons of amphetamines into the country and police raids in Sweden have uncovered 100 kilos of the drug. Two men, 61 and 56, said to be the brains behind the operation, have been remanded in custody in Malmo. Another six arrests have been made, one in Sweden and five in the Czech Republic.
“We are very pleased that we have succeeded in catching the leaders of this organization. We’ve put a lot of time and resources into this,” said Stefan Steiner, who led the operation for the Swedish police, to Sydsvenskan. The arrests are the result of a two-year police investigation.
The drugs were made in the Czech Republic and were intended for the Swedish market. Police estimate that 3.5 tons of amphetamines have been sold by the group over the years. The person who owned the lab and the person in charge of making the drugs were among those arrested in the Czech Republic.
Amphetamine, also known as speed, is a stimulant used legitimately in the treatment of attention deficit hyperactivity disorder (ADHD), narcolepsy, and obesity. Taken in large doses, however, it can cause muscle breakdown and even psychosis.