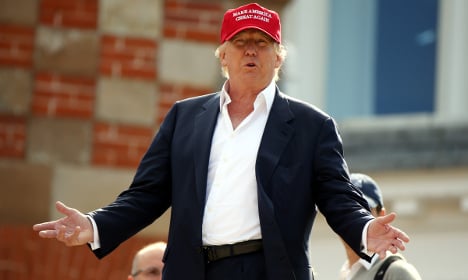 The Republican candidate for the US presidency has spent years fighting the Swedish state-owned company's proposed construction of 11 turbines off the coast of Aberdeenshire, saying they would be an eyesore.

Trum, whose mother is Scottish, tried to block construction in the British courts, but in December the Supreme Court ruled against him.

His golf course was hugely controversial and faced considerable local opposition as it was built on an environmentally protected coastline of rolling dunes.

READ ALSO: Do you also want to trump Donald Trump?

On Thursday Vattenfall said it would invest more than three billion kronor ($348 million) into the 92.4 megawatt farm.

Installation of the turbines will start in late 2017 and become operational the following spring. Construction of land-based infrastructure will begin in the coming months.

Vattenfall will buy back its stake in the project from the Aberdeen Renewable Energy Group and will finance a European Offshore Wind Deployment Centre (EOWDC) that will host a research centre for innovation in wind energy.

“The decision to invest in the EOWDC comes only a few weeks after the British referendum on leaving the EU and demonstrates Vattenfall's continuing long-term commitment to wind power in Great Britain,” the Swedish company said in a statement.

Magnus Hall, CEO and President of Vattenfall, said: “We aim to double our wind power capacity from two to four gigawatts by 2020 and are focusing on reducing and streamlining our offshore wind power costs.”

“Our investment in the EOWDC off Aberdeen is an important part of this process,” he said.