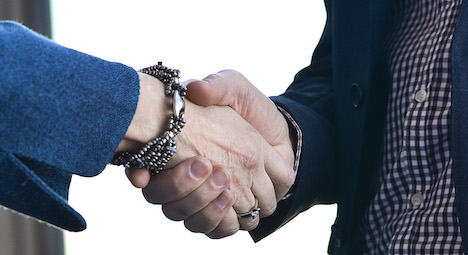 The man, a practising Muslim, worked for Helsingborg municipality in southern Sweden. He said it was against his religious beliefs to shake women’s hands, although he was happy to shake the hands of male colleagues.

But council bosses said his stance was incompatible with their equality policy, and said he could no longer work there.

“We are in favour of diversity. People can believe what they like, but that doesn’t mean that they can discriminate. We will stand up for values like equality,” Liberal councillor Maria Winberg told The Local.

The man’s name and the exact nature of his work have not been revealed, but he was working on a casual basis. Speaking to SVT he said: “I don’t understand why someone would take exception to me greeting them with my hand on my heart.”

But Winberg, who is in charge of the council’s HR policy, said the man’s stance had gone down badly in the workplace: “His female colleagues felt they were being discriminated against. You can believe what you like, but you can’t behave how you like in the workplace.”

The man’s immediate boss had “stood up for equality and shown great courage,” Winberg added.

The man’s case has been taken up by Malmö mot Diskriminering (Malmö Against Discrimination), and Lund District Court will hear the case at an undecided future date.

“This kind of situation will become more common, and it’s good that the case is being tried,” Winberg said.

The question of handshaking has led to bitter rows in Sweden in recent months. Most prominently, a leading member of the Green Party, which sits in the coalition government, was forced out of his post after it emerged that he refused to shake women’s hands.

Last month, the police force in Skåne came out in defence of a border guard who had taken a similar stance with female colleagues.

Similar debates have also been raging in other countries. In Switzerland, two teenage boys raised the hackles of some politicians when it emerged that they had refused to shake the hands of female teachers.