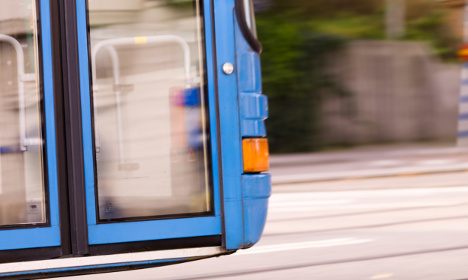 The video showing the driver abusing an asylum seeker on Öland, an island off the east coast of Sweden, went viral after regional newspaper Barometern first wrote about the incident. The Local interviewed the Syrian victim on Wednesday, who said it had left him shocked and humiliated.

The driver, who has been suspended pending a police and an internal investigation, shared his version of events for the first time with the Östra Småland newspaper on Friday. He said he had also been injured in the altercation, with a fracture in his arm forcing him to take sick leave until August 31st.

“Of course you should not act the way it looks like I acted in the video. But there is a story before this that has not been told,” he said.

He told the newspaper that the violent incident was sparked by previous conflicts between bus drivers and some of the residents at the asylum centre on northern Öland.

“Most of the asylum seekers on Öland are very nice people. But there have been problems with some of them. They never stand at the stops, but demand that you should stop wherever they are. They get off for a smoke or run to the store when you pick up other passengers and demand that you should wait. Some have not paid,” he said.

READ ALSO: Watch the video of the altercation here

The Syrian man, who arrived in Sweden in October after fleeing his war-torn country when his brothers were killed, told The Local on Wednesday that the driver had closed the doors in his face when he tried to catch the bus. But according to the driver the man never indicated that he wanted to get on board.

When the passenger got on the bus at the next stop, he snapped a picture of the driver, who told Östra Småland that he next got up and tried to take a picture of the Syrian man, but the phone was knocked out of his hand when he received a slap on the arm. He then hit the man and shouted “I hate you damn swines.”

“It's of course stupid. I'm definitely not a racist, many of my friends are from other countries. What I mean by shouting that is that group that can't behave,” he told the paper on Friday.

“I should not have acted the way I did. It was stupid. I have to accept the consequences. But saying that what happened was completely unprovoked is simply not true.”

A spokesperson for the company, Nobina, told The Local earlier in the week that an internal investigation has been launched into the incident, alongside a police investigation. The driver himself has also reported the man to the police for violence against an official.

Another spokesperson for Nobina said on Friday that the traffic manager for the region had tried to speak to the driver after the interview with Östra Småland, but had not been able to reach him. The Local has attempted to contact the union representative.