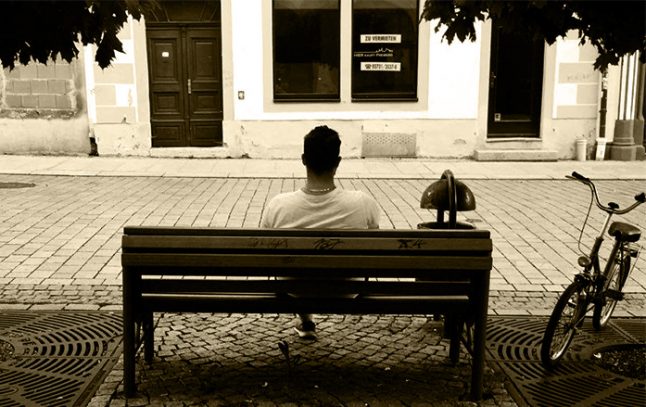 Alanov. Photo: Private
There has been a Jewish community in Syria since Roman times. In the 19th century it numbered several thousand, but by 2005 just 80 Jews remained. Most of these have fled since the war started, and by the end of last year it was estimated that just 18 were left in the country.
Under Assad, Jews were officially banned from politics and government employment.
“If you talk to my grandparents, they would tell you that there was no hatred among Syrians toward Jews or anyone else. Jews used to have jobs and trade, and that was very popular in Syria before the Assad regime came to power in the seventies, after which most Jews were forced to flee.”
Despite this Alanov says he had a great life, and was two years into a Law degree when he came to Sweden. But back in Syria he had to be discreet about his Jewish background:
“Most of our neighbours knew that we were Jews, it was quite normal and fine. However, I have never said openly that I was Jewish to those who didn’t know us”.
Most Syrians don’t feel comfortable hearing about Jews living in Syria, he says.
“That was not because we lived in a society with a Muslim majority, it’s mostly because of the Assad regime’s approach, and what Syrians were taught at schools. Schools always taught indiscriminate hatred of all Jews.”
“Whenever I was asked, I would say that I’m Christian.”
Despite the difficulties faced by Jews, Alanov is clear that he loves his country.
“I love Syria, I love Damascus,” he says.
“We used to love each other, my friends were of all religions. I celebrated Ramadan and Christmas with my friends, and that didn’t mean I changed my religion.”
Alanov says his parents told him that before the Assads came to power in 1971, Syrians were highly educated, open minded and liberal. Hafez al-Assad and his son Bashar, the current president, “destroyed the country on all levels, they kidnapped the whole nation.”
Jews felt this particularly: “We couldn’t practice our rituals normally by going to synagogues for example, and mostly worshipped at home in secrecy. The worst thing to me was hearing my schoolmates expressing hatred towards Jews,” he says.
“After all the destruction in Syria, a country with more than 5000 years of civilization, I started to doubt God’s existence.”
Alanov came to Sweden in 2014, after five years in Lebanon. His brother is also in Sweden, his sister is in Germany and his mother is back in Lebanon. Seeing his family is an impossible dream at the moment. He points to the irony of Europeans freely travelling to Syria to join Isis, while innocent Syrians are unable to travel.
“In the asylum countries, they give you something and take others. Here for example, you have to wait for them to decide on your life. You might wait for two years to have the chance and know what they have decided for you; either to stay or to be deported – is that freedom? Isn’t that degrading?
“And that’s not only in Sweden, it’s everywhere. To all EU countries I ask, why have you closed your borders now? Now there’s more destruction in Syria than before?”
Despite the frustrations, he is full of praise for the “respectful and humane” way Swedes have received refugees.
“They are not racists – love stems from their hearts. At the time of the refugee crisis, I went to Stockholm’s Central Station to help people; and we saw how the Swedes were taking off their jackets and clothes to offer them to the refugees. They helped while no Arabic country wanted to do so.”
Alanov still longs to return to his homeland, despite the difficulties faced by Jews there.
“It’s not about Sweden or anywhere else, but it’s hard to feel like you’re losing your homeland. In Sweden I can openly express my beliefs – but still, that doesn’t mean I am free.”
“We need to go back and build our country; we can build the future of our country and no-one else.
“I have lost my dignity, and I have lost my freedom. I am free when I am able to say it openly among my Syrian brothers and sisters: I am a Syrian Jew.
Url copied to clipboard!