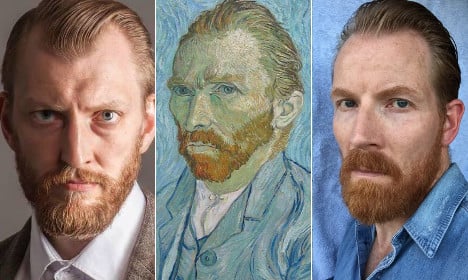 As The Local has previously reported, the best-selling Canadian writer Douglas Coupland is crowd-sourcing the globe for the world's top lookalike of the late post-impressionist artist van Gogh. The winner's face will be 3D printed and cast in bronze for a sculpture of the Dutch master.

Ivar Arpi, an outspoken leader writer with major Swedish newspaper Svenska Dagbladet, was one of the most hotly tipped names to win… until another Swede without warning zoomed to the top of the list.

Petter Samuelson, a management consultant in Stockholm, now has almost double the votes of the writer. But with two Swedes near the top, the Local had to ask what it is about Swedes and Vincent van Gogh.

“It must be Swedish melancholy combined with the beard trend. Arpi got in touch when I started getting closer and suggested a meeting on a foggy morning for a 'paint-off'. I accepted, of course,” said Samuelson.

At the time of writing, he has more than 41,000 votes, while his Swedish competitor has around 22,000 votes in third place. But the two face another adversary: another Dutchman, by the name of Onno Heesbeen, who is nipping at Samuelson's heels at some 40,700 votes.

Asked about the media hype, the Swede said: “Many people have wanted my ear, none have wanted my drawings. In fact the commitment shown by friends and strangers has been magical. It's been shared and promoted, films and paintings have been created based on my pictures. It's insanely fun.”

The van Gogh bronze sculpture is the first in a series of Redheads on Douglas Coupland’s to-do list. A website explaing the project describes redheadedness as “genetic magic”, a human mutation which is “a microcosm of the way in which all life on Earth changes with time.”

The lookalike title appears to be highly sought-after. Arpi has vowed he will cut off his ear, in the style of the famous artist, if he wins. Samuelson seems a bit more reluctant when it comes to self-mutilation.

“I would like to invite everyone who has voted to a great colour party, whatever that means, but that might not be doable. So maybe I'll just sent sun flower seeds to everyone instead,” he said.

The winner will be announced on August 20th. And Samuelson promised he has a strategy in place.

“The strategy is obviously to be incredibly depressed almost constantly. Plus learning everything about sun flowers and starry skies. I've put everything together in a comprehensive Power Point presentation with plenty of graphs,” he said.

We are pretty sure he was joking about the Power Point bit.