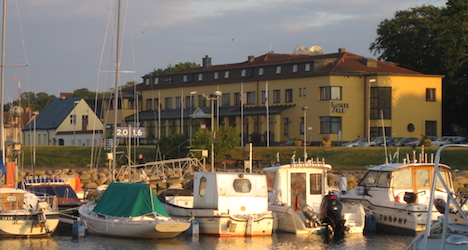 The harbour in Simrishamn, close to where the incident took place. Photo: Jorchr/Wikimedia Commons
The boys, from Simrishamn in southern Sweden, were convicted in 2015 and fined for the gestures. But the court of appeal ruled on Monday that the students, aged 15 and 16 at the time, had acted spontaneously and out of youthful ignorance rather than any intention to cause harm.
The case started after a school assistant at Korsavad school, who had been behind the camera, reviewed the images. She reported the incident to the school’s headteacher Pia Svensson, who informed parents and then reported the students to the police.
The boys had argued in the lower court that they had been unaware that their picture was being taken at the time and that they hadn’t intended to express hatred for foreigners. One of them claimed he raised his hand to cover a spot on his mouth so that it wouldn’t appear on the photo.