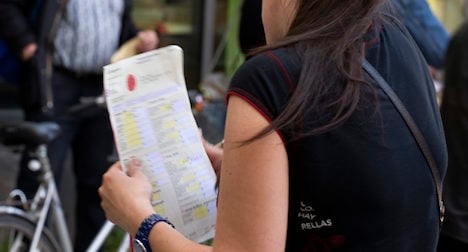 A taxpayer hands in their tax declaration. Photo: Bertil Ericson/TT

Sweden is often seen as a high tax country, but while your Swedish tax bill might make you wince, its likely to be lower than it would be in many of Sweden's neighbouring countries.

Swedes could celebrate ‘Tax Freedom Day’ – the day they stopped working for the state and started working for themselves – on June 22nd this year, two days before they celebrated Midsummer’s Eve, according to a study of EU countries by the Institut Economique Molinari, a Franco-Belgian research institute.

By contrast, the French won’t be able to mark the occasion until this Friday, more than a month later. The Italians, Greeks, Germans, Hungarians, Austrians and Belgians also all work longer than the Swedes to pay their dues to the state.

And things have gone in the right direction for those Swedes who want to pay less tax: in 2010, they weren’t ‘free’ from taxes until July 1st. The tax cutting centre right government helped move that date forward nine days, before the centre-left government that took power in 2014 pushed it back one day later.

In some other countries, including France, Austria and Italy, people spend considerably more time working for the taxman than in 2010.

Does this mean that Sweden isn’t the high-tax country that people think?

“This study measures the tax burden of a worker on a typical salary, which differs from a lot of other tax freedom surveys,”  James Rogers, one of the researchers behind the report, told The Local.

“From a British or American perspective, people expect Sweden and Denmark to be the highest, but when it comes to taxing people on an average salary they’re left with a higher proportion of what they earn as disposable income than say in France and Germany,” he said.

The British and Irish get to keep more money for themselves than most, with tax freedom coming on May 9th in the UK and April 30th in Ireland. Cypriots lead the pack in the EU, with their tax freedom day way back on March 29th.

By some measures Swedes actually pay higher taxes than, say French people. For instance, the highest income tax rate in Sweden is 59.7%, compared to 45% in France. But that doesn’t mean that ordinary people pay more tax in Sweden.

A Swedish employer pays €1.75 for each euro the employee receives net of taxes. In France, employers pay €2.20 and in Belgium €2.16 for the same result.

“If you are paying the top price, it’s worth looking at whether you’re getting the best schools and healthcare,” Rogers said.

This story was updated to clarify which taxes were taken into account when calculating the tax burden.