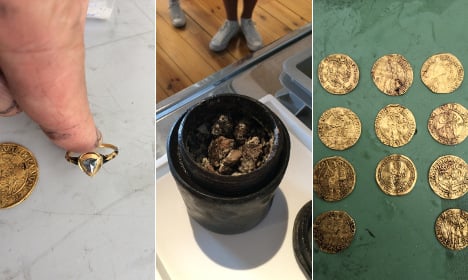 Divers excavating the royal ship Kronan in the waters off the Baltic Sea island of Öland came upon the smelly material inside a black tin jar found on the seabed this month.

“It's a pretty good guess that it's some kind of dairy product, and we think it is cheese,” researcher Lars Einarsson at the Kalmar County Museum told The Local on Wednesday.

“It looks a bit like some kind of granular Roquefort cheese. It's been in the mud, so it's reasonably well preserved, but at the same time it has been at the bottom of the sea for 340 years – we're not talking Tutankhamun's burial chamber,” he said.

“I think it smells quite nice, because I like exotic food. But I would not want to taste it.”

He and his team presented the suspected cheese on Tuesday along with some of the other items salvaged during the two-week diving project in July – including 14 gold coins and a diamond ring.

READ ALSO: My incredible experience on board Sweden's Vasa ship The royal ship Kronan sank at noon on June 1st, 1676, just prior to hostilities beginning between the Swedish and the allied Danish-Dutch fleet, known as the “The Battle of Southern Öland”.

Only some 40 men survived the sinking of the ship, with 800 or so perishing in the waters.

More than 20,000 items have so far been recovered from the vessel since it was located in 1980, including crew members' cranial remains, with traces of brain tissue.

As for the cheese, it is currently being kept at low temperatures awaiting a scientific analysis to find out exactly what it is and what it could reveal about life on board a Swedish ship in the 17th century.