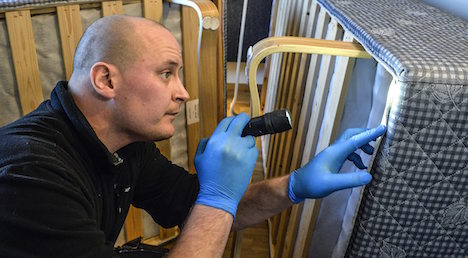 Six years ago, Anticimex was called out 350 times to deal with bedbugs in hotels. Last year, the company dealt with 689 cases, according to figures the company shared with TV4.

The worsening of the problem has led to many hotels instructing cleaners to shake off mops and cloths before cleaning. Some hotels are even using specially trained dogs to try to detect the blood-sucking parasites.

“It can really affect hotels badly if they get a reputation as a bug spreader – so they naturally want to avoid this. It could completely trash a brand,” Clemens Wantshura of Swedish tourism industry organisation Visita told TV4.

But if this is putting you off Swedish hotels, it's worth noting that the problem is worse in many other places.

Bedbugs were rare in the developed world until the 1980s, though common in parts of the developing world. Today infestations are widespread in North America and Europe. The increase in international travel and resistance to pesticides are often blamed for the spread.

The number of reported incidents in New York City rose from 500 in 2004 to 10,000 in 2009. In London, the first decade of the millennium saw the creatures double in number every year.

Bedbugs are parasites that feed on blood, particularly human blood. They thrive indoors particularly in bedding. A bedbug bite will often leave a rash, but the creatures do not spread other diseases.