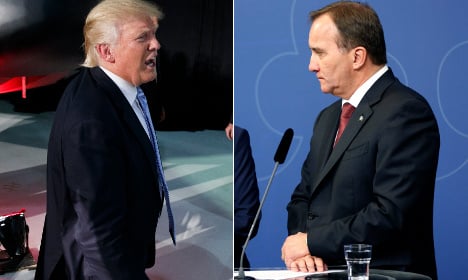 Speaking to the Aftonbladet tabloid on Monday, Löfven said that he has been paying close attention to the presidential election campaigns in the United States.

Asked how his country's relationship with the US would change in the event of a Trump victory, he said: “I think, unfortunately, that it would be different and not for the better.”

“Sweden should always make an effort to have good relations with countries around the world regardless of who is in power. But it is clear to see when you watch the [party] conventions that one is based on fear and division. Hate, I would almost say, or at least antipathy. The other one is based more on faith in the future.”

“I want Hillary Clinton to become president. There's no doubt about it,” added Löfven.

PLAY THIS GAME: Swedes invite you to trump Donald Trump

Löfven has previously admitted he supports the Democrats, although he has up until now, after the party picked Clinton as its nominee, avoided naming his preferred candidate.

Swedish politics in general tends to be more left-leaning in comparison to the US, even when you include parties such as Löfven's rivals the Moderates and the Christian Democrats, who are both seen as right or centre-right by the Swedish electorate.

In a poll of 100 Swedish members of parliament in March, more than two-thirds said they supported one of the Democratic candidates for president. Only three politicians, all from the anti-immigration Sweden Democrat party, favoured Trump at the time.