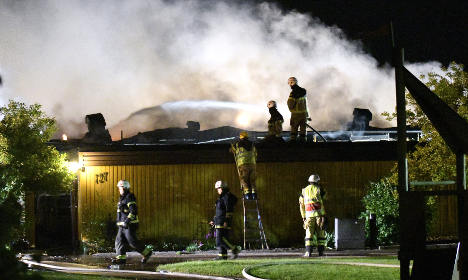 Firefighters tackle a fire in Svedala, one of several to break out in Sweden over Monday and Tuesday. Photo: Johan Nilsson / TT

At 10pm on Monday the alarm was raised in Svedala near Malmö after a terraced house caught fire. Firefighters worked on extinguishing the blaze throughout the night.

“Four houses have been completely destroyed in the fire. We have contacted the residents from three of them, and haven’t been able to contact the person who lives in the fourth. We are investigating where the resident is,” Anna Göransson of Skåne police told news agency TT.

An investigation of the site is due to be conducted once the fire is completely extinguished and the rubble has cooled.

In Kramfors municipality in the north-east of Sweden meanwhile, police fear that a woman in her 60s may have died after being trapped inside a burning summer house. When emergency services were called to the building at 6am it was in flames, and they focused on preventing the fire from spreading.

A technical investigation has not yet been possible because of the heat.

“We haven't been able to search for a body, but one person is feared dead,” police inspector Kenneth Magnusson said.

A man with burn injuries met rescue personnel outside the building and informed them that someone was still inside. He was subsequently taken to hospital.

In Falköping north-east of Gothenburg, a central road was cordoned off due to a fire in an empty kindergarten building. Firefighters were alerted to the problem at 6am and asked local residents to keep their windows and ventilation closed to prevent smoke inhalation.

“Smoke is always poisonous, so we urge people in the area to keep their windows, vents and doors closed, and to go indoors if they have the chance,” Falköping-Tidaholm fire chief Perry Malmberg warned.

There were no reports of injuries from the wooden building, which has been empty for some time, but was due to house a kindergarten in the autumn. Police have launched a preliminary arson investigation.

In Gävle, a similar warning to residents to stay indoors was lifted after emergency services managed to bring a fire at a scrapyard under control. The blaze broke out at the port area of Fredriksskans at 2.30am, but by 8am firefighters had managed to contain it.

“Fire extinguishing work is under way just now and we expect to be at the location throughout the day,” Magnus Östlund of the Gästrikeleden rescue services explained. No people were harmed or buildings damaged.

The spate of fires comes during an unusually dry summer for Sweden, where on Monday the national weather institute SMHI issued a warning for potential forest fires in eastern parts of the country.

Farmers in some parts of the country meanwhile now expect to have a smaller harvest than usual due to the dry conditions, with southern Sweden predicted to suffer most.