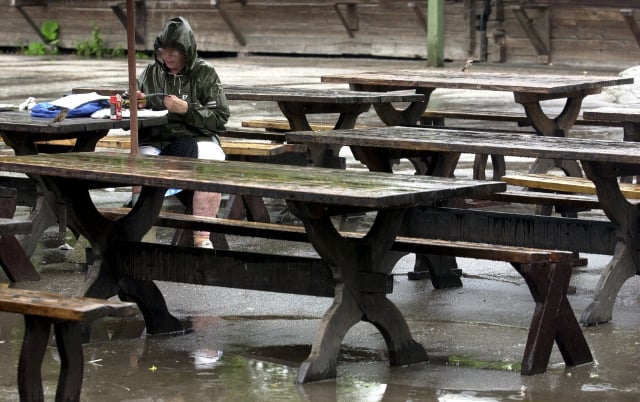 Come rain or shine, we'll be outside. Photo: Tomas Oneborg/TT

For a foreigner in Sweden the summer period can feel like entering a parallel universe. The warmer months provoke a burst of colour across the country, but it's not only the environment that changes, it's the people inhabiting it. Baffled by competitive barbecuing, struggling to get anything done or just wondering where everyone is? You're not alone. Read this.

1. Come rain, hail or shine, you will be outside

As soon as the year produces a glimpse of sunshine, Swedish restaurants and cafes start to offload their tables and chairs outside, ready to pull in extra punters who want to catch a few rays, or as is perhaps more likely, a few raindrops.

The unwavering Swedish desire to be outside during the summer always seems to trump the actual satisfaction of being outside even when the weather is not particularly summery. In other countries, a chilly August day or a gusty July evening would provoke a change of plans from those who had hoped to spend their time on a terrace sipping wine, but not in Sweden.

Instead, cafes and bars equip their outdoor seating areas with the thinnest of blankets, which in the hands of a Swede seem to magically transform into a thermal cover capable of handling near arctic conditions. Perhaps it’s the Viking blood that makes it possible, but in any case, there is something admirable to be found in the resolute determination to be outside as much as possible when others would shirk the challenge. A Swede could survive in the North Pole with those purple blankets. Photo: Janerik Henriksson/TT

2. Barbecuing is a big deal

If there is a smell which defines Swedish parks in the summer time it is that of the burning of lighter fluid on barbecues. Forget packing a feeble picnic, the grill is the method of choice for outdoor eating in Sweden, and if you thought it was as simple as throwing a few slabs of meat and some vegetables on top of some burning coals, you are gravely mistaken.

In Sweden, barbecuing is a serious business, and the proof is in the productions. The TV4 show “The Grill Masters” (Grillmästarna) follows the country’s best amateur grillers as they fight it out in intense challenges to separate the “burners from the true barbecue artists”, with the winner given the coveted title of Sweden’s grill master.

Leading tabloid Aftonbladet meanwhile has even produced a “Grill Bible” in the past, detailing the must-have barbecuing products for the summer season. Fascinating. In Sweden, if you grill it, they will come. 3. Getting anything done is a nightmare

Swedes like holidays, and in particular, they like long ones. Perhaps owing to the brevity of the nation's summer season and the need to take advantage of it while it’s still around, many choose to take a four-week block off from work rather than spread their vacation out. For anyone who has recently moved to the country, turning up to your favourite café to find it is closed for a month, turning up at work to find no one is there, or crossing what is usually a busy street without encountering any traffic at all can be something of an unsettling experience.

The biggest downside to Sweden’s mass vacation is that it can be incredibly difficult to get anything done during the height of summer. While important public services stay open for the period, their staff numbers tend to be greatly reduced, leading to frustratingly long waiting times.

With the concept of taking a long period off in the summer so ingrained in Swedish culture however, it’s unlikely that any amount of moaning will change anything any time soon, so it’s best just to suck it up and accept that things happen slowly at this time of year. Just suck it up and take time off. Photo: Johan Nilsson/TT

Even when the month-long vacation is over, on any given summer weekend many Swedes will flee their usual homes for a smaller, more basic dwelling outside of the city. The fabled sommarstuga (‘summer house’) is identifiable from its usually wood-based construction and lack of anything that may be considered a semi-modern amenity. In other words, if you’re looking for a flushing toilet, you came to the wrong place. Yet the Swedes still love it.

Twenty percent of Swedes (around 1.8 million people) own a summer house, while more than 50 percent of the population has access to one. For an outsider who continues to inhabit the city during the weekends, what the locals actually do at these mythical residences remains a mystery, but there have been rumours of gardening and excessive handiwork. It's relaxing, apparently. A Swede's idea of a good time in the summer. Photo: Anders Wiklund/TT

5. Eating out of season is a no-no

In case you haven’t noticed by now, traditions are key to the Swedish summer experience, and that extends to food. The tail end of the summer ushers in the only time of the year it is considered socially acceptable to eat two foodstuffs in particular: crayfish and surströmming, or fermented herring.

Crayfish eating and the parties that go with it generally take place in August or at a stretch September, owing to a time in years gone by when local restrictions were placed on when the shellfish could be fished. These days however, most of the crayfish Swedes eat are imported, so there is no reason why it couldn’t be eaten all year round.

Yet most still choose to restrict their crayfish munching to the party season, as evidenced by the massive increase in the presence of the product on the supermarket shelves during that period. It’s a similar case with surströmming, which despite being a canned food, is almost always eaten in the latter summer months.

One explanation for that tendency is that the smell is so bad that the cans need to be opened outdoors, yet surely if the eaters love the stuff so much – and with the Swedes being so hardcore about the weather – they could also stomach briefly stepping into the October air to open a batch? Regardless, it just generally doesn’t happen, so anyone thinking about munching on some surströmming or crayfish in December should prepare for some odd stares. The only way to eat crayfish. Photo: Hasse Holmberg/TT