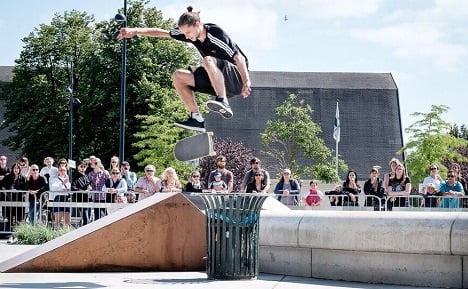 ”Thirty years ago, Malmö didn't have great conditions for becoming a skateboard city,” Gustav Edén confesses. Edén is the city's project coordinator for everything skate related. It's an unusual job, perhaps – but in Malmö a very important one.

”Compared to many places in the world, the climate isn't that great, the architecture hasn’t been very skate-friendly , and people’s attitudes toward skateboarding haven’t always been positive.”

But things have changed. On August 20th Malmö will host the World Championship final of the Vans Pro Skate Park Series, a massive professional skateboarding contest with semi finals in four countries. How did Sweden's third-largest city manage to snag the global skateboarding spotlight?

It's all thanks to the great relationship that Malmö City has with its skateboarder population, Edén says.

”In the 90s the skaters in Malmö would gather in an old garage where they started a skate-organization. The City gave them support and with every chance they got, they did something new and good for Malmö. It’s grown from their drive and being such good partners to the City.”

The city rewarded the skateboarding club's devotion by giving them the building Bryggeriet, which became, at the time, Europe's largest indoor skatepark. And from there things just got better.

“In the early 2000s there was a push in the city to build a new outdoor skate park,’ says John Magnusson, who works with events and construction at Bryggeriet.

“The skate organization and the city became close in the process, and that good connection has been growing and strengthening since then,” he explains. “Having a good relationship with the city makes it easier for us to do what we want to do– we can get great facilities, hold great events, attract more people and help the skate scene in Malmö grow.”


John Magnusson at the construction site.

He says that the lack of tension between the city and the skate community is what makes Malmö unique. It's also what landed Malmö the World Championship.

”They realized that Malmö has something no one else has,” says Edén. ”The City of Malmö views skating as a resource and a crucial part of our city development. It makes Malmö more alive.”

”It’s really what sets Malmö apart and puts us on the forefront when it comes to developing a skating community and the city’s skate infrastructure,” Magnnusson agrees.

“We’re still an authentic skate community in that we’re sort of underground, but we learned how to work high and low; how to also engage with the city. We’re probably leading globally in that respect and that’s a large part of why we’ll be hosting the World Cup here in Malmö.”

It's not just about having great skateparks, both indoors and outdoors. Ever heard of a skateboard high school? In Malmö it's a reality.

”We have the world's most developed skating high school, where the skatepark is on the groundfloor and the school itself is above that,” Edén says. ”People from across Scandinavia move to Malmö just to go to school there.”

And when the World Championship came calling, looking at Malmö as a location for a semi final, the city made it clear they were in for the long haul.

”At first the plan was to build a temporary skatepark in an arena, charge for tickets, and then tear it down and leave,” says Edén. ”For us, it’s crucial to develop Malmö's skating scene long-term and therefore we pushed to build a permanent park instead. That was a more attractive option to them as well.” The city also insisted that there be a women's competition in the championship.

”When we host events, we want to showcase the women. For female skating to grow, you have to show that it’s normal for girls to skate.’ Edén says.

That combination – the devotion to developing the skate scene, building a permanent new skatepark, and the remarkable collaboration between the city and the skate community – convinced the championship that Malmö was the right place for the final, not just one of the qualifying competitions leading up to it.

The semifinals have been held in Melbourne, Floripa, Vancouver, and Huntington Beach in California, and on August 20th the culminating competition will take place in Malmö.

John Magnusson was given the task of designing the new park and put together a special construction team to make the park really shine.

“This World Cup series is something totally new for the skate community, it’s the first one that’s ever been held and it’s happening here in Malmö,” Magnusson explains. “We’re in a position to define what that sort of competition looks like, so there will be a lot of eyes on us.” The park itself – which Magnusson describes as “truly insane” – is almost done, and just waiting on the finishing touches.

“I’m super stoked to show it off and see other skaters get a chance to try it out,” he exclaims.

“It feels great – this is what we’ve been working toward: really putting Malmö on the skate world map. We hope we can be an inspiration to other cities and skaters to show what’s possible when you work together. Hosting the World Cup is really proof that we’ve succeeded.”