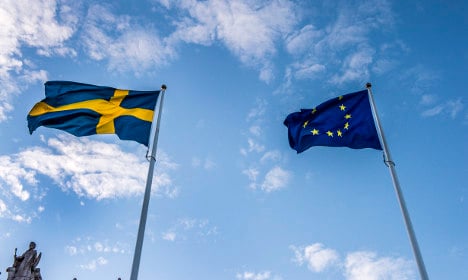 Compared with the previous edition of the survey from November however, the number of Swedes who welcomed non-European immigration had declined by eight percent – the largest decrease registered in the study.

The latest edition also showed that Swedish attitudes on immigration from within the EU were overwhelmingly positive, with 78 percent in favour of it. It was the second-most positive response to the question from any EU member state, with only Luxembourg more positive at 81 percent.

Despite a majority positive attitude to immigration in Sweden however, the study showed that it is still a major talking point in the country.

When asked what the most important issue facing their nation was at the moment, “immigration” was the highest scoring answer provided by Swedes, with 44 percent opting for that response. That is significantly higher than the EU-wide average of 28 percent. Sweden’s reputation as a peaceful nation rang true when asked what the most positive result of the EU is meanwhile, with “peace among the member states of the EU” scoring highest at 76 percent, significantly more than the EU average of 55 percent.