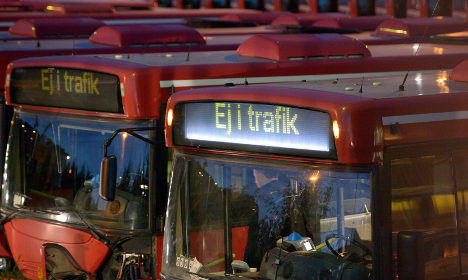 A video showing the driver punching an asylum seeker on Öland, an island off the east coast of Sweden, went viral last month after regional newspaper Barometern first published it.

The passenger, Mohammed, and bus driver both reported the alleged assault to the police, with the driver claiming he had been hit on the arm during the altercation and had received a fracture.

Nobina, the bus company, told The Local at the time that it had launched an internal investigation of the incident alongside the police probe, with a spokesperson describing it as “tragic” and “unacceptable”.

The driver has now been fired, reports Sweden's public broadcaster.

“We believe he did the wrong thing,” press officer Mahdi Ahmadi told SVT, but declined to elaborate.

Speaking to regional newspaper Östra Småland last month, the driver admitted to hitting the other man, but said that the whole story had not been told, referring to previous conflicts between bus drivers and Öland asylum seekers which he said had sparked tension.

“I should not have acted the way I did. It was stupid. I have to accept the consequences. But saying that what happened was completely unprovoked is simply not true,” he said.

Muhammed, who fled war-torn Syria last autumn after his brothers were killed, meanwhile told The Local that the incident had left him “shocked” and “humiliated”.

“I don't know why or how even that happened, I never expected this could happen to me in Sweden. (…) I still can't understand it. I've left Syria to avoid being beaten or killed, and I found myself being beaten in Sweden – that's shocking.”

However, he said he refused to let the experience change his overall impression of his new home.