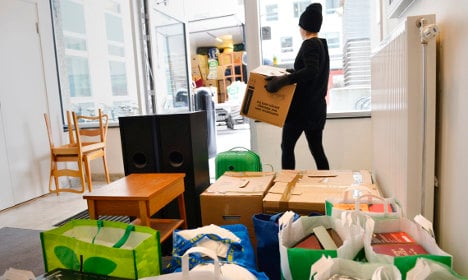 1. Laundry is now the most important thing in your life

Remember those lazy Sundays where you put your laundry on, left the house, had a walk in the park and a coffee before casually coming home to hang out the drying? Remember them fondly, because now that you are moving to Sweden, they are dead.

Space is at a premium in Swedish apartments, and one of the first things you're likely to notice when you enter one is the lack of a washing machine. Residents instead tend to do their laundry in a communal washroom somewhere else in the building, with timeslots booked ahead of time.

With so many people sharing the same laundry space, getting a last minute booking is a rare thing, so unless you want to know what it feels like to reach Wednesday, realize you have no underwear left then rush hurriedly to H&M to buy more (and trust me, it doesn't feel good) you'd better get used to planning your washing weeks ahead.

On the positive side, “I can't, I have to do my laundry” becomes a nice alternative to “I'm washing my hair” as an excuse for not turning up somewhere, with the difference being that you genuinely can't come. You have to do your laundry. Or else. The laundry room: where your social life went to die. Photo: Henrik Montgomery/TT

2. The first rule of subletting is you don't talk about subletting

Unless you've been in the queue for one of Sweden's state-regulated apartments since you were born – and let's face it, you haven't – finding a first home in the country is likely to mean finding a sublet. Overcrowding and accommodation shortages mean renting “second hand” is a common way of living, particularly if you're young. Yet despite that, subletting is often treated like a deep, dark secret that should never be revealed.

Why? In theory, it shouldn't really be done, or at least not for long. Tight regulations mean that if someone wants to hire their rental apartment out in Sweden by the book, they will need to provide a valid reason for doing so (for example, going to study abroad). For the same reason, contracts tend to be frustratingly short.

The result? Well, we're not suggesting that some people choose to rent their apartments out through unofficial means, but… Put it this way: when your neighbour's tone of voice drops to a whisper and he or she starts looking around shiftily once you've told them you're subletting, you now know why. 3. Think you have storage? Think again

So you finally managed to find an apartment? Good news. The bad news is you're only renting half of it. Those handy looking cupboards in the kitchen are so handy that the contract owner decided to fill them with their horrible glassware while they left on a gap year. Ditto the large cupboard in the living room, which probably contains the world's biggest collection of blue Ikea bags – or worse.

Fortunately, many Swedish apartments come with loft or basement storage elsewhere in the building. Unfortunately, that's full too. After all, where else would the owner put his or her ski equipment, collection of childhood toys, or random junk? Renting in Sweden means traveling light. Get used to it. The contents of your new cellar. And don't even think about touching them. Photo: Janerik Henriksson/TT

4. The spring (and autumn) clean dilemma

Swedes have a reputation for being solitary types, but when it comes to looking after apartment buildings they're actually pretty collectively-minded. Twice a year the normally lonesome creatures can be seen out in their courtyards, raking leaves, brushing gravel together and even conversing as they take part in the traditional spring and autumn cleaning session.

You have two options here: either you're a good citizen and you take part, make a token effort to clean up some rubbish and make awkward small talk with Henke over a hotdog, or, you wait patiently and watch carefully for the right moment to leave the house, then sneak away while everyone has their back turned. The choice is yours, but remember: you'll be leaving for another apartment in six months anyway. If you see this, run for the hills. Photo: Hasse Holmberg/TT

5. Don't be fooled: that nifty-looking library is useless

Swedes hate to throw stuff away, and the proof is in their well-organized recycling schemes, meaning cans and bottles can often be taken to recycling stations in supermarkets and exchanged for money.

That reticence to waste things has its downside though, and nowhere is it more apparent than on the communal bookshelf. The location varies, but whether it's in the laundry room, recycling area, or in a room of its own, you're bound to find a shelf full of old books somewhere in your new apartment block, where texts are left “kindly” by other residents who are eager to share their latest great read.

It's a trap. Unless you find the Swedish equivalent of Mills and Boon enticing, or are desperate to read the 98th edition of Sven-Göran Eriksson's autobiography, then move along, there's nothing of interest for you here. Dress it up any way you like: but those books have been left there for a reason, and the reason is that they aren't wanted. They left it on that shelf for a reason. Photo: Hasse Holmberg/TT