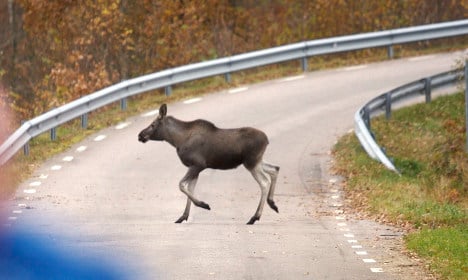 File photo of an elk in Sweden. Photo: Anders Andersson/TT

The police officers had been called out to an incident when an elk on the road went straight through their windscreen near Östhammar, some 50 kilometres north-east of Uppsala, shortly before midnight on Wednesday.

An ambulance travelling behind them was able to stop and take one of them to hospital. The other had to be cut out of the vehicle.

“It took some time to get the other colleague out. If you're lucky [the elk] goes up on the roof, but this one ended up inside the car,” police control room officer Tommy Karlsson told the Aftonbladet tabloid.

Regional newspaper Upsala Nya Tidning reported that the officers has suffered cuts and minor fractures, but they were not understood to be seriously injured.

Wildlife officers were called out to take care of the elk carcass. The road was closed for about an hour and a half after the accident.

There have been 2084 road incidents involving elk so far this year, according to the National Wildlife Accident Council (Nationella viltolycksrådet).

The figure tends to peak in autumn as the Nordic days grow shorter, which coincides with the wild animals' mating period. Last year officials even warned drivers to drive extra carefully and be on the lookout for lovesick elks roaming the roads.