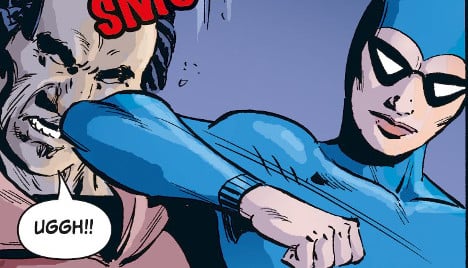 Who's going to be the next Phantom? Photo: Egmont Publishing

Created by American Lee Falk in 1936, The Phantom focuses on the 21st in a line of masked crime-fighters who use strength and intelligence to defeat foes – until the inevitable day that a foe comes out on top, and the title is given up to an heir.

For years, readers have speculated over what would happen when the main hero of the comic eventually dies. Would his daughter Heloise, or twin brother Kit take over?

It looks like fans in Sweden are about to get an answer to the big question. The Scandinavian nation, which has written its own timeline of the comic since the 1960s, has now started to produce editions set in the future, covering the events after the 21st Phantom’s disappearance. The people behind the Swedish comic have now hinted heavily that Heloise will emerge victorious in the battle to become the 22nd Phantom.

“The Phantom creator Lee Falk created Heloise, and as such he established the possibility of a female Phantom,” Andreas Eriksson, editor of the Swedish version of The Phantom said in a press release.

“It would be illogical to expect Heloise would step away from the possibility of becoming the Phantom without a fight. She grew up in the jungle and is equally trained for the task as her brother,” he added.

Diehard fans will know that the comic’s backstory did already feature one female version of the Phantom in the past, but that incarnation was only a temporary one. When the 17th Phantom Kit Walker took ill, his sister Julie donned the suit until he had returned to health.

Swedish editor Eriksson told The Local that a new full-time female Phantom would be a natural next step for the series.

“The prospect of a female Phantom has been around for a long time and is part of the concept of the series. As such it would be a natural development for the next Phantom to become a woman,” Eriksson explained.

While a change of direction for the full-time Phantom may be on the cards in Sweden, fans of the classic 21st Phantom shouldn’t be too concerned. The Swedish writers have promised that they will continue to produce editions focusing on the old Phantom, with the future-based instalments released sporadically.