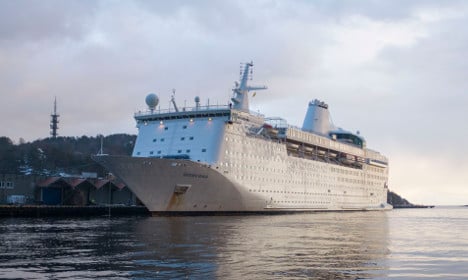 Floating Accommodations has been fighting to keep the Ocean Gala at Utansjö port on the Sweden's east coast ever since Härnösand municipality denied it the right to reside there last April. The municipality subsequently banned the ship from docking in its harbour.

And on Friday, the Östersund regional Land and Environment Court threw out an appeal from the company against the ban. That decision could bring an end to a complicated dispute over the future of the boat as a form of asylum accommodation in Sweden.

The argument dates back to February, when Sweden signed a deal with the shipping firm to lodge 1,800 asylum seekers aboard the Ocean Gala. The original plan was to dock the vessel in Härnösand’s Utansjö port, but the municipality vetoed hosting the ship.

Swedish migration board Migrationsverket accepted that veto in April, before scrapping the accommodation agreement with the shipping firm entirely on July 7th, saying it was void after they failed to secure the necessary permits.

The authority also rejected a demand from the firm that it should be paid 800,000 kronor ($93,786) per day to cover the rent of the places on the ship. But the argument wasn’t finished.

It soon dragged on when Floating Accommodations responded by docking the Ocean Gala at Utansjö anyway, arguing that it did not require planning permission to do so. As soon as the ship had docked, Härnösand municipality reported the owner of the port to the police, saying it was not entitled to host the ship.

Floating Accommodations argued that the municipality had campaigned against them to stop their project, and appealed against its ban from the Utansjö port to the Östersund Land and Environment Court.

But with that appeal today rejected by the court, it could finally be time for the Ocean Gala to set sail.