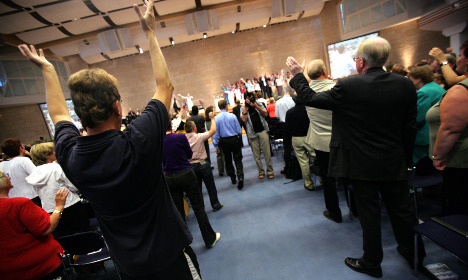 At a meeting in Uppsala, the Livets Ord (Word of Life) organization presented how drones flying at a high altitude would release thousands of small, electronic bibles into Iraq.

“The bibles are the size of pill boxes and have a display. They require no electricity, but work on their own,” its mission director Christian Åkerhielm told broadcaster SVT.

“Our ambition is to pass on the hope and love of the Christian gospel to a population living in closed areas where they are being denied human rights,” Livets Ord wrote on its website.

It said another organization in the area would be carrying out the operation, but did not name the other group.

“We start our project in a few weeks and hope to drop thousands of bibles,” it said.

A spokesperson later told The Local that the operation was not intended as a provocation.

“This missions project is closer to traditional smuggling of bibles, and it is not connected to any military or aggressive action in any way,” he said.

Founded in the 1980s, Livets Ord is one of relatively secular Sweden's largest and arguably most controversial free churches, often accused of a sect-like image. Its founders Ulf and Birgitta Ekman left the church in 2014 to convert to Catholicism.

It also runs a series of evangelical schools for children. The current leader of the Christian Democrat party, Ebba Busch Thor, who is from Uppsala, attended one of them until she turned 16.