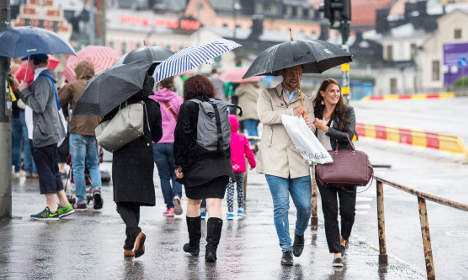 There's some of this coming your way. Photo: Marcus Ericsson/TT

Sweden has had an all-around decent summer, with the occasional heatwave sweeping the country (although some of our readers expressed doubt that 25C qualifies as a heatwave) every now and then.

But nothing lasts forever.

Some parts of the Nordic country have already registered the end of summer, including the mountain weather stations in the far north, but also parts of the Jämtland region.

“But according to statistics it's not very unusual that it happens at this time of the year. In the rest of the country we still have summer temperatures,” said Staerk.

According to the meteorological definition of autumn, the season arrives when the mercury stays below an average 10C for five consecutive days.

Temperatures in the rest of the country are expected to stay at around 15-20C this week. But swapping your sunglasses for the umbrella might still be a good idea.

“It's going to be quite wet in most parts of the country, particularly in northern Norrland. Mid-week, most of the rain will fall in southern Norrland,” said Staerk.