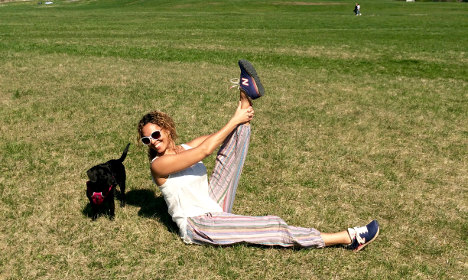 “I think there was a part of me that was Swedish before I was Swedish,” laughs Janessa Clark, 37, a decade after she first fell in love with the Nordic country on a visit to a Swedish friend’s sommarstuga (summer house) in Borlänge in the picturesque Dalarna region.

She returned to the hustle and bustle of New York, where she was pursuing a career she loved as a dancer and choreographer. But once Sweden grabs hold of your heart, it does not let go.

“I then met my partner in New York and her mum was Swedish. In 2011 I decided to leave because I had been there for so long, so we went to London where I did a master’s degree,” says Clark.

She completed her studies and had nothing to keep her in Britain, but the couple found they were not yet ready to go back to the United States. So when Clark was offered the opportunity to run a Stockholm-based friend’s Pilates studio while she went on maternity leave, the choice was not difficult.

“We had family in Sweden and I felt that it was time to just take the leap. This is four years later and here we are,” she tells The Local, just back in the capital after the long summer holidays.

“I’m a big city girl through and through, and I’ve always lived in big cities. I spent my childhood in Berlin, Germany, I went to college in Phoenix, Arizona, so I know how the big city works. Stockholm feels like a breath of fresh air, because it’s urban and progressive but not as stifling and urgent as New York.”

Today, Clark runs her own Pilates studio in the Vasastan area of Stockholm, targeted at a wide range of people, from Swedes born in the city to new or long-term expats.

“When I first moved here I wanted to keep fit, but I didn’t understand enough Swedish to follow the instructor, so I set up a programme called Expat Pilates. There’s such an expat business community here where people want to integrate but don’t yet speak the language,” she says.

Many of her Pilates clients from that time still come to her classes, which today consist of a 50-50 percent diverse mix of native Swedish speakers and people from all over the world.

“Everyone is used to me speaking English, but I know enough Swedish by now to translate if someone doesn’t understand or make a joke in Swedish,” says Clark.

Pilates was created in the early 20th century and is meant to be a dynamic system of exercise that combines the mind, body, and spirit while developing muscle strength, flexibility, fuller breathing and the ability to stabilize the body even outside of the fitness class.

“Swedes tend to be quite active as it is, they go on hikes and walks. American clients tend to be familiar with Pilates, because they are tuned into trends. But those who haven’t taken it before often go ‘whoa, I thought we were just going to lie here and breathe’ – but it’s really active.”

“But it is not just an exercise fad where you go ‘oh no, it’s beach season, I have to go to Pilates’, although those people do exist. You use your body as a tool during exercise and the whole philosophy is that it is meant to enhance everything else in your life,” explains Clark.

It is about finding the balance between mind and body, strength and flexibility, work and play, she explains.

“Oh, I love the Swedish work-life balance! Built-in fikas, generous holiday allowance, I get to leave early on a Friday – it is such a contrast from dancing in New York,” laughs Clark. Janessa Clark in her Pilates studio in Stockholm. Photo: Private

For now, she is happy keeping one foot back home with her family in the US and one in Sweden with her partner Jessica and Pilates studio, where she feels she is able to contribute to her adopted country.

“I feel like I belong here now, I’m part of a community, part of the neighbourhood where I’m based, able to offer a slightly different perspective on health and training. I wouldn’t say anything negative about other teachers, but the feedback I get is that my classes have a lot of energy, I ask a little bit more, challenge their limits,” says the New Yorker.

“I’m very vocal and animated and especially during the long winter months I think it helps people feel more alive, I draw something out of my clients that has lain dormant,” she half-jokes.

However, as much as she loves her home in Stockholm and Sweden, she also describes her dancing years in New York as some of the best of her life, and has not yet decided where her future lies.

“Life in Stockholm is pretty great. If I want to hit the gas pedal and listen to loud music then I miss New York. But if I feel like slowing it down so I can see where I’m going then I like Sweden. In my ideal universe I would go back and forth, because my parents are getting older and I want to spend time with them,” she says.

“But if I do go back to New York I will definitely have a sommarstuga in Sweden!”