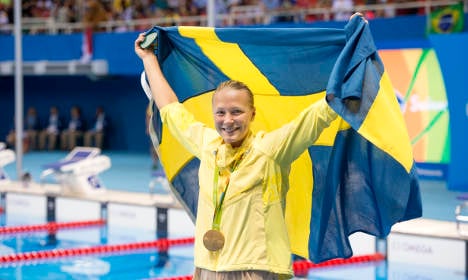 Sjöström touched in 55.48sec, lowering the mark of 55.64 she set at the World Championships last August in Kazan, Russia – where she broke the record twice.

“I knew that when I had a good turn – I came in with my hands perfect in the turn – I knew it would be hard for the others to swim faster,” Sjöström said.

Neither had an answer for Sjöström on Sunday, Oleksiak clocking 56.46sec and Vollmer – who took time off after her London triumph to start a family and has a 17-month-old son, Arlen – finished in 56.63.

Sjöström, who was fifth in the 100m fly in London, has dominated the event since 2013.

“Of course, all the time,” she said. “It's like an every day struggle.”

But she didn't let the doubts weaken her resolve.

“I knew before the Olympic games that was something missing, and I knew no other girls (from Sweden) had won an Olympic medal before and I thought maybe it's time now.”