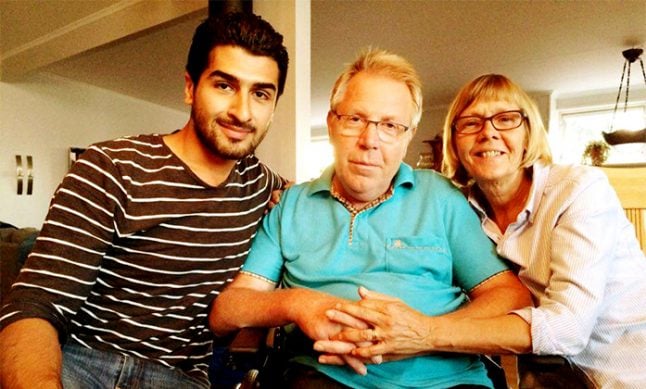 Anas Awad with his "Swedish family", the Nilsséns.

Awad says that Sweden is “exactly as I imagined” and has embraced his new beginning, but it wasn't easy.

When he was first assigned to Figeholm, a camp in Oskarshamn, in October last year, the 24-year-old says he felt “psychologically destroyed”.

“I was relieved, but still couldn’t understand what was happening!” he recalls. “I spent three days inside and then two weeks in a period of mental fogginess; I just wanted to talk to my family and friends. As time passed, I started to talk to people in the camp, and got to know the staff there. I started to re-balance and to carry on a normal life.”

In order to do that, he felt that he should start volunteering and interacting with other people, to make sure the time spent waiting for an asylum decision wasn’t wasted.

After about a month at the centre, he was with a friend at the Red Cross when he got talking to the office manager, Yvonne, and mentioned his desire to work with the charity.

“I said: ‘I don’t want money or anything else in return, I just want to join and help both you and the refugees.’ And she promised to help. I eagerly waited to hear more,” says Awad.

In December, the law graduate was welcomed into the local branch of the Red Cross, where his first task was collecting clothes and toys for refugees in Oskarshamn. He finds the work rewarding, saying: “I feel so happy when I help others, because I know how it feels for the one to be in need. I can relate situations of weakness to my own hardships; when I took the weary journey to Europe.”

And the experience has also been beneficial to him.

At first, Awad communicated in English but soon Yvonne began to use Swedish with him. Although he couldn’t yet start SFI language classes, he was eager to progress and practised his language skills with the Swedes who volunteered alongside him.

“The best way to approach the Swedes is by using their language,” Awad explains. “I wrote down every new word I heard, I saved them on pieces of paper and learned them by heart.”

What's more, learning the language helped Awad to build friendships and meet his “Swedish family”, the Nilsséns. Awad says they are “great people who have treated me as intimately as if I was living among my parents and siblings. They are my life now; my family.”

While the Nilsséns have been a particular help to Awad with his Swedish learning among other things, he says that no Swede he has turned to for help has let him down, and that everyone he has met here has helped him “without hesitation”.

However, he tells The Local Voices that in general, Sweden could make more of an effort to engage newcomers in society.

“In our camp for example, no-one came and looked for the talents and the skills that could be existing there,” says Awad. “There were doctors, lawyers, engineers and more; all these people whose education haven’t cost Sweden anything, and whose skills could be used for the good of the country.

“Just imagine if 50,000 of the 150,000 asylum seekers to Sweden got internships in their own professions. Wouldn’t that be great? Most of these people don’t ask for anything in return other than getting involved in the community.

Don’t throw what could be gold in the dustbin.”

Awad answered some questions about his life in Sweden and hopes for the future.

Why did you choose Sweden?

Because it’s a peaceful country, and my heart needs this. And because it is so green, which is important to me.

What does Sweden mean to you?

It means everything; it means life. Sweden is peace; peace to nature and humans, and on all levels.

How do you feel about Syria?

It’s my home as well, why should I only have one home? Can’t I belong to both of them?! Sweden is where I find myself right now; it’s where my thoughts, ambitions and deeds are going to be appreciated.

What is your dream job?

I always dreamed of working with Human Rights Watch [an international NGO]. That’s why I came to Sweden, because it’s humane.

What are your thoughts on the changes in Sweden’s asylum laws?

Now that I speak Swedish, I have friends and family here, yet I still haven’t received an interview date from the migration agency. But I can’t – and won’t – complain. It’s their country, and they have the right to decide on what’s best for their nation.

I still believe there has to be a kind of differentiation between asylum seekers based on urgency. For example, prioritizing those who’ve escaped war over those who moved here for economic reasons. Some people here are devastated and in real need of help.

What would you say to xenophobes?

I would say: I hope you can just try to shake hands with me. If you try that, you’ll feel the warmth of my palm – the warmth of my heart. Despite our sometimes irrational bias; we are all humans at the end of the day, and living under the same sky. I hope they can see the positive side of us.