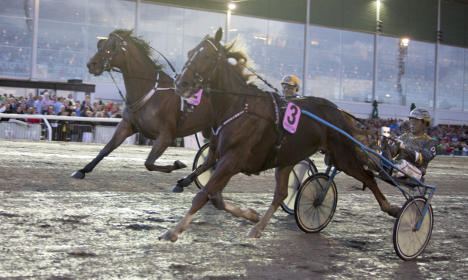 A visit to a racecourse in Dalarna changed one broken family forever. Photo: Drago Prvulovic/TT

The Azizi family were separated from son Mahdi in the masses of people moving between Turkey and Greece last year. The mother, father, and two other children ended up living in Borlänge, Dalarna, after seeking asylum in Sweden.

Agonisingly, they were left completely unaware where their third child had ended up, or even if he was still alive.

Yet little did they know he was nearby. Mahdi also managed to reach Sweden alone in 2015, and eventually took up residence in a home for unaccompanied refugee children in Hagfors – around 140km from where his parents were.

Mahdi got to know a local Swedish family there, and when they offered him the chance to come with them to a race-day on July 29th, he decided to go.

Unbeknownst to him, the racecourse they were going to was only minutes from where his parents were living.

And in an even bigger twist of fate, his father Nader also happened to cycle to the races that day so that his youngest daughter could see Swedish pop duo Samir and Viktor performing.

It was there, amongst the crowds at Romme racetrack, that Nader spotted something unbelievable.

“I thought I saw him. But I thought to myself at first that I must have been dreaming. Then I looked again. Finally, I went up and asked if it was Mahdi. He shouted ‘dad’,” he told local paper Dalarnas Tidning.

“It was amazing, I couldn’t believe it had happened,” added Mahdi.

The delighted father called a Swedish friend back in Borlänge. She quickly came in her car to pick up the three reunited family members, then take them back to break the good news to their mother.

“My mum started crying and then I started to cry. It was the best day of my life,” Mahdi said.

The family could yet be separated again however. While Mahdi has already been granted a residence permit in Sweden as he was an unaccompanied minor when he arrived, other members of his family have been rejected by the Swedish migration authority.

They are now trying to appeal the decision.