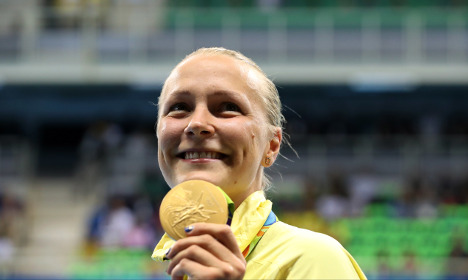 After becoming the first Swedish woman to win Olympic swimming gold on Sunday, by storming to a new world record in the 100m butterfly, Sjöström was savouring her moment in the sun.

“Ibrahimovic is one of a kind,” the soft-spoken 22-year-old said Monday after winning her 200m freestyle heat.

“It is usually always male athletes who get this stuff, the biggest name in sport – so it is nice a woman can come up and challenge him.”

“We're in the same training squad back in Stockholm and she's an inspiration,” he added.

Michelle Coleman agreed that Sjöström was a worthy champion.

“It is really inspiring,” she said. “We talked a bit last night but she got back really late and I was heading for bed. It was hard to get to sleep, there were so many emotions.”

“I think we try and keep each other calm and she helps me enjoy the ride and shows that hard work pays off. She deserves it.”

So is it now Ibra who? Not so fast, says Sjödin.

“I don't think she'll beat Ibrahimovic (in the popularity stakes) but she's getting closer,” he said. “Ibra is first –he's inspired a whole generation, and now Sarah has done the same. They're two good role models for Sweden.”

Sjöström will soon be looking to add more gold to her name in the women's 200m freestyle final, which Swedes will have to stay up late to watch in the early hours of Wednesday morning.

Her main rival is US wonder-woman Katie Ledecky, who has already set a world record in winning 400m free gold. The American topped the times in the 200m freestyle heats, but Sweden's newly crowned 100m butterfly champion was hot on her tail, so could there be more medals to come?