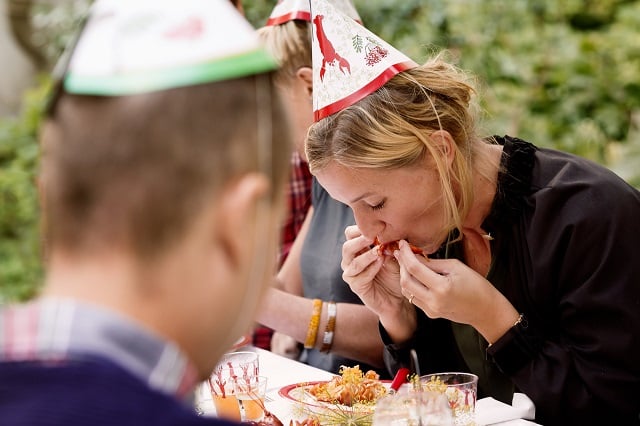 A crayfish party can be a bigger ordeal than it first seems. Photo: Carolina Romare/imagebank.sweden.se

1. Hope for a demonstration

Most of the meat and good stuff is locked away behind a pesky (and if broken the wrong way, painful) shell, and different people have different methods of getting into it.

A simple way to start is by twisting each of the claws clockwise at the base of the arms so they break off, before sucking the juices out from them and removing the small pieces of meat inside.

Then it's time for the body itself, and that's where the methods tend to differ. The overall goal is to separate the tail from the head in some way, after which point you must decide whether you enjoy eating brains.

Feel free to suck them out from the head section if you do, otherwise, put that to one side and peel the shell from the tail by breaking and pulling it away, starting close to the legs. When finished, the biggest piece of meat will be exposed.

Sound complicated? If you haven’t done it several times it can be, and unless you’re practising at home as you read, it's easy to forget. The best advice is to cross your fingers and hope that a kind host will take pity and produce a quick run-through before everyone starts eating. If so, pay attention!


For anyone who needs additional practice.

2. Don't take yourself too seriously

There's no avoiding the fact that crayfish parties are messy affairs, and to help add to your apprehension, Swedes also like to make them as silly as possible.

That means tacky decorations, moderately embarrassing but admittedly practical bibs and, to top it off, strange cone-shaped hats which are often decorated with amusing (or depending on your perspective, sadistic) depictions of the very animal you are eating.

Think you’re too cool to put on some rubbish-looking cardboard hats? You may as well not bother turning up in the first place. Whether it’s because they’re conformists at heart, or because they actually know how to let go and have a good time once in a while, the Swedes around you will all have something on their heads, and so should you.

Failing to join in will only draw more attention your way, which when, you’re already the least skilful crayfish eater at the table, may not be a good thing. So stop taking yourself so seriously, stick that hat on, hope your head isn’t so oversized the cheap elastic breaks (trust me, it happens) and enjoy yourself. This is fun. Organized fun. Remember? Those hats are not optional. Photo: Carolina Romare/imagebank.sweden.se

You’re prepared to wear a stupid hat, you're ready to make slurping noises that humans aren't supposed to emit, and you're almost starting to relax over the whole crayfish party concept, thinking at least you've survived the hard part. You’re wrong.

Why? Swedes add a whole new layer of pain to the occasion by introducing singing. On the bright side, being a good singer isn’t of any great importance. On the other hand, all of the Swedish guests know the traditional songs like the back of their hands, and it’s going to be fairly apparent that you don't.

If you really, really want to try and learn the lyrics then The Local has already rounded up eight of the most common numbers, while Oscar winner Alicia Vikander even provided a demonstration of one here.

For most people however, the only feasible option is to hum along with visible gusto, picking up the melody as you go. It may feel odd, but doing so is far better than trying to freestyle it with actual words, and most definitely better than not singing at all. Rumour has it that not singing at a crayfish party is a crime punishable by law in Sweden – do you really want to find out first-hand if that’s true or not? We thought not.


Forget the words, but learning the melody to this number is a good start.

4. Stare intensely into the eyes of your host… and toast

Perhaps Swedes really do love shellfish more than anything else, but it is tempting to speculate that part of the longevity of the crayfish party as an event may just be linked to the copious amounts of alcohol (particularly snaps) consumed.

In Sweden, even drinking comes with rules. When a toast is proposed at a Swedish party – and it will be – everyone is expected to raise their glass in response and (here comes the scary part) look one another in the eye.

If you don’t like too much direct eye contact it can be an unnerving experience, but that’s just the way it is. It gets less unsettling the more you drink, we've heard.


Toasting at your crayfish party may be marginally less intense than this one.

The hats have been worn out, the singing has grown old, the food is gone and the bulk of the alcohol consumed, but the party may not be over. Party games are popular in Sweden, so don’t be surprised if at some point in a post-dinner haze you’re separated into teams with other guests for something competitive.

If the weather is good there’s a decent chance you could end up playing Kubb, a lawn-based game that involves throwing wooden batons to knock over blocks from a distance. If it’s not so sunny outside, cards may be the order of the day, and if you’re really, really unlucky, someone may even propose a quiz on crayfish as this website suggests.

Whatever the choice of game, approach it with enthusiasm, as it’s taking part that counts. Unless you’re stuck in a team with that one person who thinks this is the World Cup final. In which case: good luck.