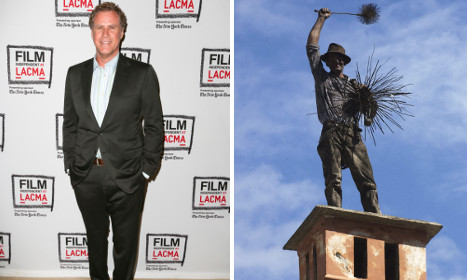 The star, who owns a summerhouse in the town and is married to Swede Viveca Paulin, has often celebrated the Scandinavian country and its culture in American television appearances.

But that hasn’t been enough to prevent him from receiving a scolding from Södertälje-based chimney sweepers Kringelsotaren, who carried out an inspection of the chimneys in his Swedish home last week on behalf of the local municipality.

According to local paper Södermanlands Nyheter, the company complained that Ferrell and his wife lack the apparatus necessary to prevent ladders from slipping when being used to access their roof. They also pointed out that the property lacks a roof ladder – a serious matter, it seems.

“Yes, what can I say, this is all about safety. If you had a car with no brakes that hadn’t been inspected, that wouldn’t be good either,” one of the chimney sweeps told Södermanlands Nyheter.

The actor has until October 17th to fix the failings, and it doesn’t sound like he will be able to use his fame to sweet talk the chimney inspectors.

“I read in a newspaper a long time ago about a famous actor who is married to a Swede. But I don’t know who he is off the top of my head,” the chimney sweep insisted.

Ferrell’s relationship with Sweden is usually a far more loving – or at least funnier – one.

Last year a video of him performing a version of a popular drinking song with Swedish actress Alicia Vikander went viral, while he has even been known to take part in the Swedish national sport of winding up the Norwegians.