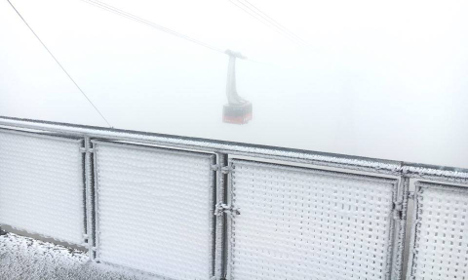 But while some of our readers may think that mid-August is just a tad too early for skiing and snowmen, business owners at the Åre ski resort were cheering the early snowfall on Thursday.

“Of course not everyone thinks, as we do, that snow in August smells like longing for winter and skiing. We love the winter even in summer,” said Marie Lithén, owner of family-run mountain restaurant Bistrologiskt at 1,274 above sea level, whose colleague Anton filmed the white stuff whirling around the building.

The video spread quickly in Sweden after they posted it on their Facebook page, where it had been viewed more than 236,000 times and shared by some 1,400 users by Thursday morning.

“It's somewhat incredible how weather can get people going,” Lithén told The Local.

“Great to get an early start on the ski season. Get those piste mobiles out,” commented one Swedish viewer on Bistrologiskt's Facebook video.

“Lovely, a cup of coffee and an insanely tasty cinnamon roll and happiness will be complete,” wrote another.

“FINALLY,” commented another delighted snow fan, although some seemed less excited. “How do you survive?” asked one, presumably southern, viewer. “Damn, that's horrible,” wrote another.

Further south, in Bohuslän on the west coast, Ljungskile residents reported the coldest day in August in more than 100 years on Wednesday, after the mercury only managed to climb to 8.6C.

That's 0.2C colder than last Christmas Eve in the town.

“It does feel a bit strange to have to wear your fiber coat when you go outside,” Stig Magnusson, who runs local weather site ljungskilevader.se, told the Bohusläningen regional newspaper.

Temperatures across Sweden were expected to stay at around 10-15C on Thursday. But next week may see a return of summer, with around 20C predicted for southern and central Sweden.

READ ALSO: Snowmen in summer? This was Sweden in June