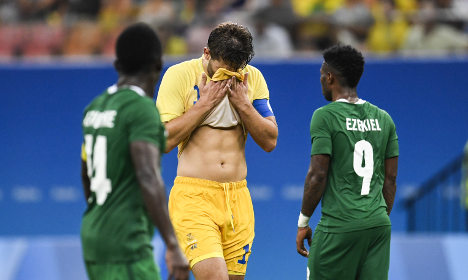 Astrit Ajdarevic, who is the captain of Sweden’s Men’s Olympic football team, was probed by the press just after his side were eliminated from the 2016 Olympics following a 1-0 defeat to Japan.

The topic was one first raised earlier on Wednesday when new Sweden coach Janne Andersson appeared to suggest that he would demand all of his players learn the words to the country’s national anthem.

“The fans travel half of Europe and sing their hearts out when the team plays. In my national team it’s important to sing. To sing together. So listen now if you are on the pitch before kick-off. Learn the words, because we will sing that song with the fans,” he told radio station P1.

And when the issue was put to Olympic captain Ajdarevic immediately after his team were sent home from Rio, it provoked an emotional response.

“Singing has nothing to do with football. Do you think Zlatan Ibrahimovic doesn’t feel proud after scoring all those goals? He has never sung, and he has represented Sweden wherever he goes,” the tearful footballer told newspaper Expressen.

The Örebro midfielder was born in Kosovo, but moved to Sweden with his father during the Yugoslav Wars. He has represented Sweden in national football teams since the age of 14.

“I came here to represent Sweden. I know where my parents are from. I know what Sweden has done for me. I came from something bad, that shouldn’t exist in the world. War. Violence. That shouldn’t be linked to football,” he added.

New Sweden boss Andersson’s statements on the country’s anthem have provoked a mixed response, and sparked debate over the importance of singing the song to national identity.

Writing in Expressen, Federico Moreno labelled it “like a choir director saying his singers need to be able to play football”, while Dagens Nyheter's Johan Esk said Andersson was “giving the subject undue importance”.

“I’m sorry to have to say it but, if you care about who sings the anthem or who doesn’t… you’re a real loser,” journalist Margret Atladottir wrote on Twitter.

“The Swedish national anthem means very little to me. Why should it need to mean something for people who became Swedish due to being refugees?” Robert Pettersson asked.

Others supported the initiative however: “If you represent your country it is obvious that you should sing the national anthem. It shouldn’t even be a question,” Swedish FIFA agent Michael Kallbäck insisted.

“Wait. It’s news that Janne Andersson would like his team to sing the national anthem? Cut my throat. Again,” Tobias Holm added sarcastically.

Andersson has now backtracked on his comments however, saying on Thursday that he did not mean to suggest singing would be an obligation.

“I understand if it was maybe interpreted that way, and I agree that isn’t good, which I’m sorry for. I was simply not clear enough with what I meant,” he said in a statement on the Swedish Football Association website.

“I meant that there is a symbolic value in that we do it together with our supporters, who sacrifice a lot and share our belief in winning matches. But that said, there is obviously no obligation in any way,” he added.

Swedish newspaper Aftonbladet pointed out that four different players chose not to sing before the 1-0 defeat to Japan on Wednesday.

And they are not alone in their preference. Sweden’s record goal-scorer Ibrahimovic also chose not to sing the anthem before kick-off while representing his country – though he did record a hit version of it with producer Max Martin in 2014.