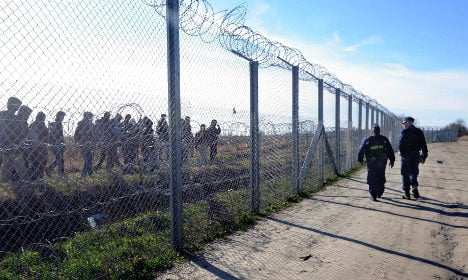 Hungarian police patrol a fence on its border to Serbia. Photo: Zoltan Gergely Kelemen/MTI via AP

Swedish Migration Minister Morgan Johansson told news agency TT that Hungary had informed Sweden it would not apply the EU's Dublin Regulation, under which asylum seekers may be sent back to their first country of arrival in the EU to have their application processed there.

“All countries have to follow the joint rules, otherwise they can't be members. I will summon the Hungarian ambassador next week and convey this,” Johansson said.

In June, Austria also protested against Hungary's refusal and Budapest then ultimately agreed to take back asylum seekers registered as having entered the EU in Hungary.

The massive influx of migrants to Europe in 2015 has put a strain on the EU's legal framework for asylum, putting countries like Greece, Italy and Hungary under immense pressure after hundreds of thousands of migrants and refugees trekked through those countries in a bid to reach wealthy European nations.

In Hungary, the anti-migrant government of right-wing Prime Minister Viktor Orban has erected razor wire and fences along the southern borders and brought in tough anti-migrant laws.

Sweden says it currently has 1,061 asylum seekers it would like to return to Hungary, out of more than 152,000 migrants who are awaiting decisions on their asylum applications.