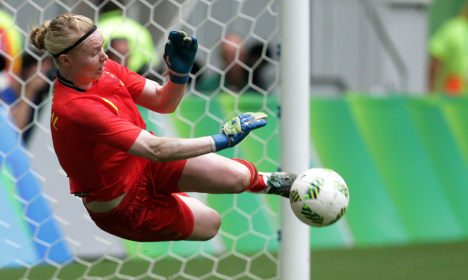 Lindahl saves a penalty in the shoot-out against the USA. Photo: TT

Goalkeeper Lindahl suffers from vitiligo, a condition that causes patches of skin to lose their pigment, making the skin particularly sensitive in the sun.

“I was feeling the sun and the heat turn into my enemy,” said Lindahl, who saved US star striker Abby Morgan's penalty in a shootout as Sweden inflicted America's first Olympic defeat for 15 matches on Friday.

“I applied it before and after the warm-up and in the half-time too. In fact I have still some burns in my face now.”

Vitiligo is best known for afflicting late pop superstar Michael Jackson and can have severe psychological effects on sufferers.

“People may have seen usually dark skin people with some white patches. This is what I have. The biggest example is Michael Jackson,” added Lindahl.

“I started with the symptoms when I was five years old.

“I was playing and I hurt my knees and then I got some scars and then it just started to get white.

“I was actually really brown when I was a child. My sister is super brown in fact, but I am completely white.”

Whilst missing out on the odd luxury, such as sunbathing with her teammates on a tour to Australia, Lindahl hasn't let the condition get in the way of her success and has even become a pioneer for those suffering from its effects.

“I want to tell the people with the same condition that they can do stuff. They don't have to be afraid of the sun,” said the 33-year-old Chelsea stopper.

“Throughout my career, some people have sent me some mails saying for example 'I want to kill myself'. It is a really hard psychological thing because you look different and you may have big patches on your body.

“But I try to think that we are unique. It is really tough, but this is who I am.”