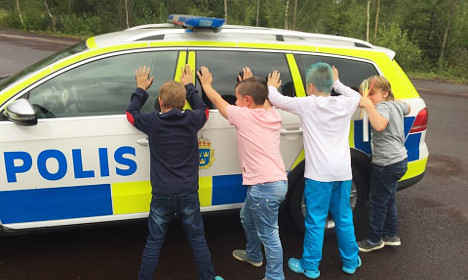 Some of the suspects. Photo: Polisen Västra Skaraborg

It might have seemed like fun at the time, but the comedown was quick and painful for these crazy kids when a police unit restored order to Vinninga, a sleepy hamlet located just south of Lake Vänern.

“On Friday police unit 53-4110 was called out to a messy party in Vinninga. It turned out to be an eighth birthday party that had spiralled out of control due to excessive sugar intake. After speaking to parents and confiscating the sweets the situation calmed down.”

A picture shows four of the wound-up party-goers with their hands up against a police car.

It looked like they were in trouble, but a police spokesman suggested that the arrest might not have been entirely serious.

Police did indeed hear about the party, but “the only intention was to please the kids”, Andreas Wedebrand told newspaper GT.

Most commenters on Facebook hailed the police for having a sense of humour, although some felt they could be making better use of their time.

Sugar is not classed as a drug in Sweden but its consumption is thought to have a hyper-activating effect on young humans.