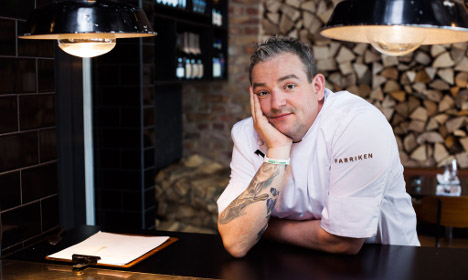 In October he will open the Fish and Chip Shop in the new Studio building in Hamnen, and attempt to make perhaps the most British of foods a Skåne staple.

“It’s not going to be a fish and chips shop that is just cheap fatty good,” he tells The Local.

“It’s going to be upmarket, we’ll do a lot of scallops and fried oysters, then we’ll also do the traditional cod and chips.”

“Everything is homemade, nothing is frozen,” he insists.

“We’ll make our own chips, tartar sauce, mushy peas. We hope to pull in students, but also families. People who want to enjoy quality food but don’t want to spend 500 kronor a head. We’re going to break the mould.”

For Luck, there couldn’t be a better place for the venture than Malmö. Perhaps the most culturally diverse of Sweden’s cities, he sees it as somewhere where most minds are open to new eating experiences.

“If I was to open a Mexican out in the countryside they’d ask why is that there? But because we’re in Malmö we have an opportunity to tap into everybody. I think that because it’s so multicultural when you do something different it’s accepted straight away,” he explains. That doesn’t mean it will be easy however. Having previously worked for years in London, Luck can see a clear difference between running a restaurant there and running one in Sweden: the Swedes have unforgivingly high standards.

“In Sweden and Malmö particularly nobody is fooled. In London you can get away with a lot, but in Malmö people have high expectations, and I like that,” he says.

“It drives you to do the best you can. You know you can’t get away with serving shit because they’ll come and talk to you. In England it’s the stiff upper lip, we’ll speak to the manager. In Sweden, they come and find you directly! It’s an open kitchen and they’ll easily find you.”

Along with the demanding customers, there are also the demands of opening a business in Sweden to contend with. That's where having a Swedish business partner comes in handy.

“I’m lucky. You have to have a good business partner to make any business succeed. If you’re a foreigner who wants to open a business in Sweden it’s different to the UK, of course,” he notes.

“I do sometimes have to deal with the form-filling though. I shake my head in disbelief sometimes. But that’s the process you have to go through. If you’re not fluent and don’t know the laws it can be tricky.”

Another challenge is finding the right ingredients to provide an authentic fish and chips experience in a country which doesn’t have the same culture of eating that kind of food.

“It’s difficult to get Maris Piper potatoes too, the type that I want. I’ve done some research and I can’t really find it. So we have that coming from Pembrokeshire in Wales. It’s through a Swedish company though, so I don’t feel too bad about it.”

There are plenty of positives to running a business in Sweden, on the other hand:

“I really like that in all the companies in Sweden everyone is protected. If you do it correctly you can have a very happy working environment,”.

“You maybe don’t make as much money as you would in the UK or America, but I want to have a nice working environment and in Sweden it’s easy to have that. A lot more is made of appreciating people and staff. That’s very high on the agenda for companies. You get rewarded emotionally as well as financially.”

Being the first true fish and chips restaurant in Malmö also means Luck has the potentially rewarding bonus of a unique position in the local market.

“We’ll probably compete with all of these burger bars that are opening up, as well as maybe the cheaper end restaurants, but because we’re so different in what we’re offering there’s no direct competition.” For Luck, the Fish and Chip Shop isn’t just about making the most of his surroundings, but also giving something back to the community.

“We’re going to do a ten percent discount for police, fire, ambulance and hospital workers. Anyone with the emergency services,” he explains.

“It’s something we feel strongly about: we want to give back to the community. We don’t have money to donate, but if you can come with your family and have a 100 kronor discount that’s something. We’re trying to give you something back for a difficult job.”

Pay enough attention to the media and it would be easy to conclude that Malmö’s emergency services have one of the most difficult jobs in the country.

The city is often portrayed in a negative light – and a few high-profile incidents in recent months haven’t helped – but after living there for nine years now, Luck couldn’t be more positive about his adopted home.

“I see Malmö as a great city. It has a negative image sometimes but maybe that’s because there was nothing happening before. I came here with my wife for a holiday 18 years ago and there was nothing where I’m sitting now. It was a run down industrial town that had to have a huge re-generation,” he says.

“It gets a rough deal. Maybe because there’s a higher concentration of foreign-born people to Swedes than elsewhere, I don’t know. But I’ve never seen any trouble. In eight years I’ve never seen a fight on the street.”

“Either people haven’t travelled much, or they’re just very nervous of people. But I really don’t see it as a troubled city,” he emphasizes.

Luck’s ambitions for The Fish and Chip Shop extend well beyond Malmö. While he admits that things could change depending on what customers want, the goal is to roll the venture out elsewhere eventually.

“We want to establish the name, which comes with trial and error. When you open a business the public always changes it into something else through supply and demand,” he notes.

“But what would be really nice in the long term is to have maybe 10 or 15 of the restaurants, then franchise it, who knows? It’s something that could be done that way: I think every small town will have one. I think big.”

For that to happen the Malmö restaurant will need to be a success. But the Welshman is fairly confident that the residents of a city he trusts will take to it.

“I have faith in the people of Malmö. I love it. It’s a great city: there’s something for everyone here.”