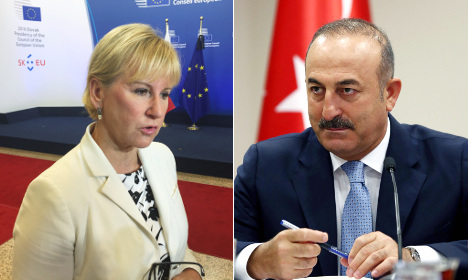 Turkey has summoned Sweden's ambassador to the foreign ministry, the Turkish minister said on Monday.

“It is a scandal for a foreign minister to post such a tweet based on false news or speculation,” Foreign Minister Mevlut Cavusoglu said in televised comments, adding that the Swedish envoy had been summoned to his ministry.

Swedish Foreign Minister Margot Wallström had tweeted on her official account that the “Turkish decision to allow sex with children under 15 must be reversed”, following a controversial ruling by the Turkish constitutional court.

Turkish decision to allow sex with children under 15 must be reversed. Children need more protection, not less, against violence, sex abuse.

“A foreign minister should not tell lies and should not adopt an approach accusing Turkey,” Cavusoglu said. “Yes to criticism but this is slander, a lie.”

Turkey's top constitutional court in July annulled a provision punishing as “sexual abuse” all sexual acts involving children under the age of 15, responding to a petition brought by a lower court.

The court has given a six-month period for parliament to make this law. The lower court that brought the petition was worried there was no distinction between cases of sexual acts involving a young teenager or a toddler.

The legal age of consent in Turkey remains 18 and was not affected by the ruling. But it drew a furious response from activists worried it would open the way for unpunished child sexual abuse.

According to a report in the English-language Turkish newspaper Hurriyet Daily News, the ruling is seen as a “calamity” for the rights of children in the country, amid concerns that “child abusers will start walking around freely because there is no new regulation [to fill the void].

Cavusoglu said the Turkish government was determined to fight child abuse and added the justice ministry was currently working on new rules.

In a war of words with Stockholm on Twitter, Turkey's Deputy Prime Minister Mehmet Simsek told Wallström: “You are clearly misinformed. There is no such stupid thing in Turkey. Please get your facts right.”

You are clearly misinformed. There is no such stupid thing in Turkey. Please get your facts right. https://t.co/vrg9ybdsY0

The diplomatic spat with Sweden came after Ankara voiced fury at a similar headline broadcast on screens at Vienna airport. The news ticker, which was a report from the Austrian newspaper Kronen Zeitung, was removed from the airport's screens following Ankara's complaint, Turkish news agency Dogan reported.

“This headline tarnishes the image of Turkey, and is false,” a Turkish diplomat said after the Austrian envoy was summoned to the ministry on Saturday.

“Turkey is a state that aims to protect and develop universal human rights and as a respected member of the international society, Turkey is committed to international agreements and protocols in terms of children's rights” the Turkish foreign ministry said in response, and added that Turkey is aware of its responsibilities in this regard.