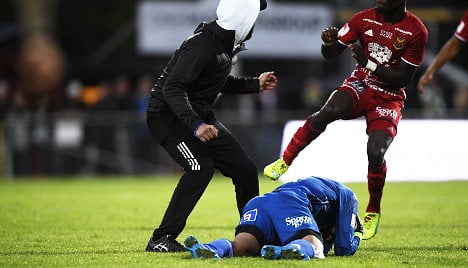 The match between Jönköpings Södra and Östersund was approaching full-time when a masked black-clad supporter burst onto the pitch and assaulted away keeper Aly Keita.

“The Östersund goalkeeper was hurt and treated by doctors. He's not fit to play again,” said match delegate Nicklas Bengtsson.

Asked about the attacker, Jönköping manager Jimmy Thelin said the club had “no idea who he is and where he comes from”.

It's the second time a game in the Swedish top flight has been abandoned this season after a match between Gothenburg and Malmö on April 27th was halted when a firework exploded at the feet of a substitute who was warming up. Malmö were consequently awarded a 3-0 victory.