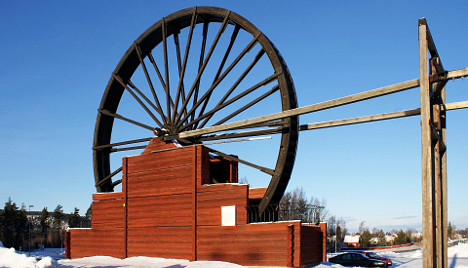 The waterwheel in Insjön where the couple were seen having sex. Photo: Jan Ainali

It was Friday night in the village of 2,000 souls when two teenage siblings wandered out with their smartphones to play Pokémon Go.

But instead of finding Pikachu or Squirtle they soon came face to face in the park with a couple who must have seemed scarcely more real.

The teenagers’ mother, who reported the incident to the police, told newspaper Dalarnas Tidningar:

“They wore rubber masks depicting pigs’ heads and they started screaming and waving a green laser.”

A laser beam hit one of the teens in the face and the children rushed back home, shaken but luckily unharmed.

The masked shooters, who also wore T-shirts labeled ‘King’ and ‘Queen’, were next spotted by incredulous motorists as they had sex beside the hamlet’s waterwheel.

Traffic backed up on the highway as some drivers slowed down and others clambered out of their cars to behold the bizarre spectacle, one motorist told the paper.

The police didn’t care so much about the traffic jam, she said, but officer Daniel Hagthorpe was concerned about the alleged laser attack and public sex.

“Pointing at someone with green laser can cause injury if it hits the eyes,” he told Dalarnas Tidningar.

And their waterwheel sex could be considered sexual harassment if anyone took offence, he added.