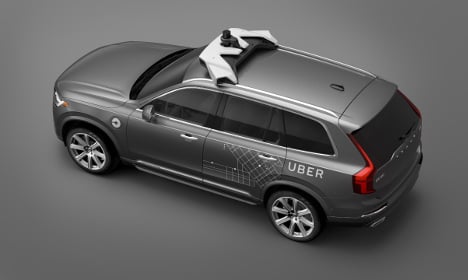 Could these be driving around by themselves in Sweden soon? Photo: Volvo Cars

“Both Uber and Volvo will use the same base vehicle for the next stage of their own autonomous car strategies,” Volvo, owned by China's Geely, said in a statement.

“This will involve Uber adding its own self-developed autonomous driving systems to the Volvo base vehicle,” it added.

Uber and Volvo were two of the founding members of a coalition unveiled in April to push for a unified US legal code on self-driving cars – a group that also includes Google, car maker Ford and Uber rival Lyft.

Both companies have previously announced plans to develop self-driving cars, which will take passengers to their destinations of choice without human intervention.

Uber unveiled its first self-driving car in May, announcing it had begun testing an autonomous vehicle on the streets of Pittsburgh, Pennsylvania.

Volvo engineers began supervised tests of semi-autonomous cars in 2014 in the Swedish city of Gothenburg, where the company has its headquarters.

It will let a limited number of people test the vehicles on the streets of London and Gothenburg next year.

“Over one million people die in car accidents every year. These are tragedies that self-driving technology can help solve, but we can't do this alone,” Uber chief executive Travis Kalanick said in a statement.

“That's why our partnership with a great manufacturer like Volvo is so important,” he added.

The chief executive of Volvo Cars, Håkan Samuelsson, said the venture placed Volvo “at the heart of the current technological revolution in the automotive industry”.